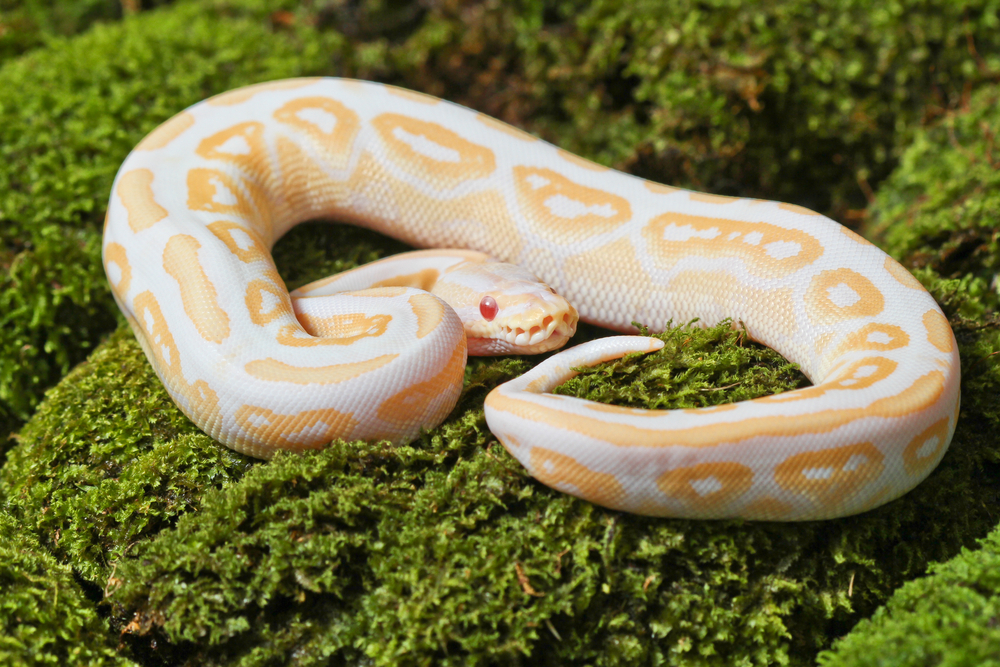 Albino ball pythons make fantastic pets. They have a calm demeanor and their bright yellow scales are exceptionally beautiful.

In fact, ball pythons, in general, are one of the best beginner pet snakes. Of course, their docile nature is one of the main reasons, but they are also relatively low maintenance. For instance, they don’t require a lighting schedule. They’re also one of the shortest python species, so you don’t have to worry about providing a massive home for a mammoth-sized snake.

The albino ball python morph is a striking snake and one of the only morphs that occur naturally in the wild. It was once a rare species, but as its popularity as a pet began to grow, breeders worked hard to meet demand. They are now commonly available.

Hopefully, you’ve come here because you’re considering getting one for yourself, or just because you’re interested in these fascinating snakes. Either way, here is everything you need to know about an albino ball python morph.

There are many stories about the discovery and origins of the albino ball python.

It is a naturally occurring morph that is found in the jungles of Togo, Ghana, and Benin. There is reason to believe that the albino ball python morphs that are captive-bred today all come from one male found in Africa decades ago.

The first captive-bred albino ball python was reportedly hatched in 1992.

These ball pythons were the first proven recessive mutation of the ball python species. As albinism is a recessive trait – this means that its genes are easily dominated. Much like blue eyes in humans, which is why we commonly see more brown eyes, a dominant trait.

The amelanistic trait means that the snake has a lack of melanin. Brown, black, and red pigmentation cannot be produced in the scales. This leads to the white, yellow, or light orange coloration that we see in albino ball pythons.

There are a couple of varieties of this amelanistic snake, either high contrast or low contrast.

A low contrast albino ball python does not retain its white markings and will be almost completely yellow, with typical red eyes. High-contrast snakes, on the other hand, display a yellow-to-white contrast and therefore have a more distinguished pattern.

Although the white and yellow colors are classic variations, there are other variations that now exist since enthusiasts started breeding albino variations.

Variations such as the lavender albino exist, displaying shades of purple.

Then there are the tyrosinase positive albino snakes that cannot produce black melanin but do produce other melanin-related pigments. An example of this is the caramel albino ball pythons that have a deeper orange color with darker eyes.

One of the major benefits of choosing an albino ball python as a pet is that they are not plagued with health issues. Unfortunately, there are many other morphs that struggle with health problems, which can be taxing on owners.

They also live relatively long, so your companion is quite a commitment. In the wild, albino ball pythons can live up to 12 years. This is pretty impressive already, as their bright colors make them an easy target for prey.

However, in captivity, they can live up to around 30 years. If you purchase a hatchling and care for your snake well, you can expect a very long and happy life with them.

How Much Do Albino Ball Pythons Cost?

As mentioned earlier, enthusiastic breeding of this species has resulted in them being readily available for purchase, in a number of color variations. They are the first affordable recessive morph and shouldn’t set you back too much.

These snakes used to cost thousands of dollars because of their rarity. In 1992, you’d have to shell out about $7500 dollars for an albino ball python. But thanks to ‘breeder fever’, they’re now only a couple of hundred.

Of course, the price depends on the age, gender, and contrast level. However, the cost is usually between $200 – $500 USD.

There are many albino ball pythons for sale as they are common snakes nowadays, you should be able to find them at your local exotic pet store. Most breeders will have these varieties of ball python because they’re easy to sell and used to create new morphs with.

You will also be able to buy these online at a variety of different online stores. My favorite site is CB Reptiles as they use world-class reputable breeders and excellent genetics. You’re sure to find high-quality albino ball pythons here.

Buying ball pythons from reputable captive-breeders is important as the West-African ball python trade toes the line of ethical sustainability.

Have a look at these incredible albino ball python pictures and see how striking the contrast is. The scale patterns are completely unique to each snake, much like a fingerprint.

Beyond being a pet, these snakes are living art, with their stunning color variations. Here you can see these amazing morphs, with both high-contrast and low-contrast scale colors.

The albino ball python morph is undeniably one of the most popular morph species and deservingly so. But check out some of these other morphs which have fascinating colorings, too:

Getting Your Own Albino Ball Python

Although it is now one of the most common ball python morphs, these albino snakes are still incredibly awesome. You cannot go wrong when choosing an albino ball python as a pet. Not only do they have a calm and placid nature, but they’re affordable and pretty easy to look after.

If you’ve decided to purchase one of these snakes, remember to equip yourself with information on ball python care. With the right care, you will love having this pet around for a very long time!