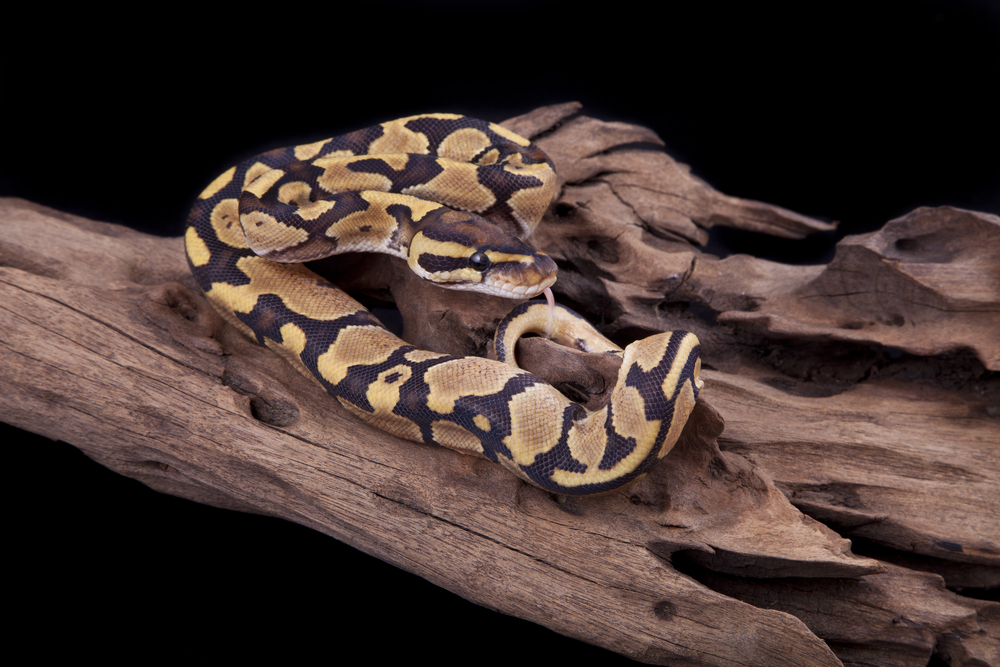 The Fire Ball Python is a stunning morph with unique genetics that produces interesting combinations when bred with other morphs, such as the Pastel Ball.

It is much lighter than a regular ball python, usually a lovely golden-hue with brown, rather than black, coloring. Unlike most morphs, that have an alien head or keyhole pattern, the Fire Ball has bands across its body with only the occasional presence of alien heads.

However, the fire gene varies greatly in appearance. Some may have more gray or unique patterning. Their heads are lighter and with faded color – known as ‘blushing’.

When blended with other morphs, the fire gene adds an incredible color dimension. This causes the colors to become brighter and stand out more.

There’s no doubt that this is an amazing morph to add to your collection, whether for breeding purposes or simply as a pet. Check out everything you need to know about the Fire Ball Python Morph below.

There is some debate surrounding the discovery of the Fire Ball. The gene has been on the market for around 20 years, and much like the Pastel Morph, it has a lot of different bloodlines. It is accepted that the first captive-bred Fire Ball was in 1995.

The Sulfur Morph is often under debate as some people think that it is a fire line, and others think it is completely unique.

The Fire Ball is a co-dominant gene that works as a cleaner and enhancer when it blends with other morphs. While it is not a very complex gene, it lightens and brightens the pattern, which can produce some incredible snakes.

Mixing two Fire Balls together produces a completely white snake with black eyes, known as a Super Fire Ball or Black-Eyed Leucistic. This is almost identical to the unique Blue-Eyed Leucistic Morph, except that it has black eyes and red pupils.

Two popular combinations are a Fire and Pastel, creating a Firefly, and a Firebee produced with a Pastel and Spider.

You really cannot go wrong with adding a bit of fire to the mix. It is such a versatile gene that is a lot of fun to play around with and most breeders love experimenting with this morph.

The fantastic thing about Fire Ball Morphs is that they do not suffer from the common genetic issues that plague other morphs. There are no instances of ‘kinking’ or ‘wobbles’ found in these morphs.

This is not only great for you, as your python morph is guaranteed a healthy life, and you are guaranteed a high-quality snake. It is also great for breeding as it is a healthy morph whose offspring will not inherit any genetic problems.

As for their life span, much like all ball pythons, they live up to an average of at least 30 years in captivity. If you take good care of them and keep their living space clean, you and your Fire Ball will enjoy a long life together.

How Much Do Fire Ball Pythons Cost?

One of the best parts of this awesome morph is its inexpensive price. A Fire Ball costs between $100 to $150 depending on where you buy it from and the specifics of the snake.

A female adult snake will cost you more than a male hatchling, for example. It’s especially advised for new snake owners to spend the extra bucks to get a young adult. This way you don’t have to worry about hatchling care and you can choose the patterning and color variations straight off the bat.

Remember, Fire Ball Pythons get lighter with age, so keep that in mind when purchasing yours.

Even the fire mutations are inexpensive. You can pick up epic designer morphs, such as the Fire Vanilla Yellow Belly, or the Firefly for less than $200.

However, if it’s a Super Fire that you’re after, that will be a tad pricier at $400.

While Fire Ball’s are inexpensive and relatively common, finding a basic Fire Ball Morph for sale isn’t too easy. However, if you look online, you’ll find tons of designer morphs produced from the fire gene.

Heading over to a breeder or a snake show is a good way to find a high-quality Fire Ball. Of course, you may have a hooked up pet store nearby, but you never know where the snakes come from.

Alternatively, there are tons of online sites such as CB Reptile and Morph Market which sell thousands of ball python morphs.

CB Reptile is an especially great site for finding snakes from reputable, breeders who only breed and sell captive-bred pythons. This is a good way to ensure that when purchasing your snake, you’re not indirectly supporting the illegal wildlife trade of pythons.

Check out these incredible Fire Ball pictures. You can see the bright yellow coloring and the banded patterning. Notice the varying colors and pigmentations of each Fire Ball in these pictures.

Some are pale with reduced patterns, while others are bright with distinguished coffee-brown bands. There is no doubt that this is one beautiful looking morph.

Are you interested in learning about some other morphs? Look below to see some popular breeds as well as morphs that blend incredibly well with the Fire Ball, such as the Pastel and Banana Ball Pythons.

Getting Your Own Fire Ball Python

If you’re trying your hand at breeding and producing ball python morphs, you are sure to be excited about the awesome potential of the fire gene. The beautiful enhancing and brightening factor which it brings to each mutation is an extremely desirable trait.

And if you’re just a python enthusiast and snake lover, you’re no doubt excited about adding this gorgeous morph to your collection. As an inexpensive, yet stunning, basic morph, you can’t go wrong heading out and getting one of your own!