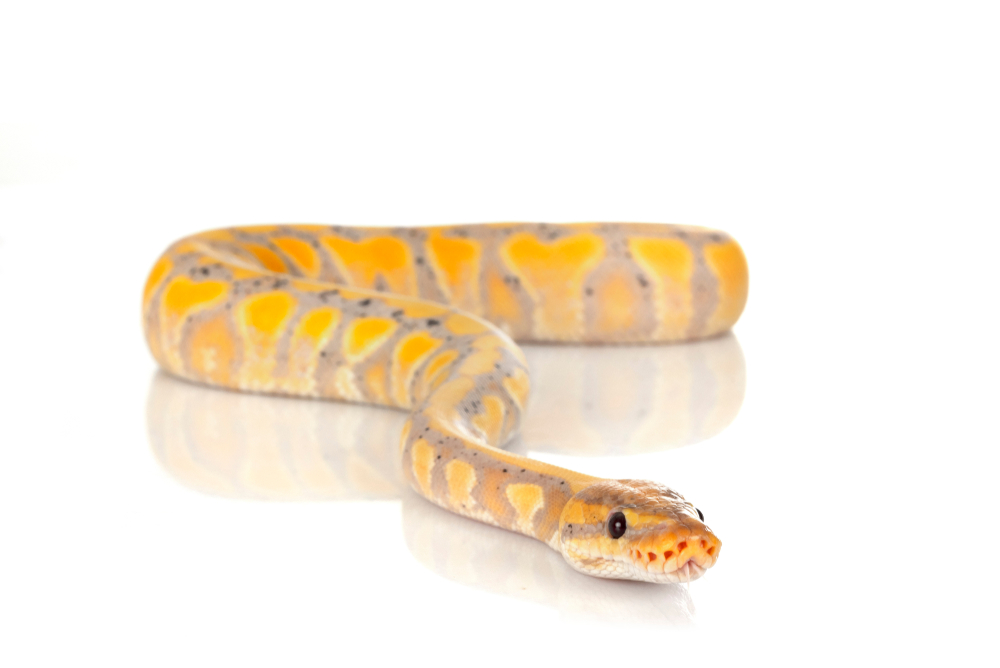 Introducing one of the most stunning ball python morphs – the banana ball python. These striking morphs usually have a brown or tan base with bright yellow blotches or spots across their bodies.

With over 1000 different ball python variations on the market, the banana ball is not overly popular compared to some other morphs. Which is very disappointing because it’s an extremely cool snake!

It’s a great first pet snake because of its small size. It’s really manageable and while it has the same docile nature of ball pythons, it’s coloration is really one of a kind.

If you’re considering a banana ball python as a pet, you’ve come to the right place. Hopefully, this article will cover every question you might have and get you feeling excited about bringing one home.

There is often some confusion around the banana ball python morph and the coral glow morph but this should clear it up for you.

These snakes are essentially the same and sometimes the names are used interchangeably by certain breeders.

However, the lines of each respective snake were supposedly started by different breeders. Information is pretty murky surrounding this, though. Basically, this means that the two snakes have the same gene but a different bloodline.

So two different hatchlings with the same genes were bred by two different people, and so today we see one bloodline referred to as ‘banana’ and the other as ‘coral glow’. There is no genetic or physical difference between the two.

In some cases, breeders may have bred between the two different bloodlines but as buyers, we’d never know. And it wouldn’t make a difference to the snake we get. Banana seems a more fitting name, it is bright yellow after all.

Like every python, the banana ball python originates from West Africa. They are naturally occurring morphs but are extremely rare. They’re hidden in the jungles of countries such as Senegal, Ivory Coast, and Ghana.

The codominant gene was first bred in 2003 by Will Slough and these snakes from the first captive-bred clutch were sold at a startling $25000! Compared to some other morphs, the banana ball python is relatively new on the scene. Especially now that it’s more affordable.

This morph is crossbred with the likes of pied and spider ball python morphs and comes in a variety of colors and patterns. Some popular mutations are the banana pied, banana cinnamon, and black pastel banana.

Combining them with dark morphs results in really beautiful patterns and the color can be a more intense orange or even purple. It definitely has genetic qualities that are fun to play around with.

Ball pythons have an incredibly long lifespan in captivity. The average is between 30 to 40 years. In fact, the longest recorded lifespan for a ball python was forty-seven and a half years in a zoo in Philadelphia.

Banana ball pythons don’t suffer any serious hereditary or genetic illnesses and health issues. If these snakes get sick, the most common cause is poor care.

Ensuring excellent care such as keeping the cage clean and humidity levels stable is invaluable for preventing illnesses. Respiratory infections are common if the habitat isn’t clean and humid enough.

How Much Do Banana Ball Pythons Cost?

Hopefully, you’re not sweating about the previous mention of one of these snakes costing the price of a car just a few years ago. You’ll be happy to know that the price has dropped exponentially since then, as breeders have worked hard to supply the growing demand of ball python morphs.

These days you can buy a banana ball python for anywhere between $150 for a baby to $3000 for a specialized adult.

Of course, the cheapest option is to always buy a hatchling, however, the care can be more complicated. Buying a young adult is best for first-time snake owners, but can hurt your wallet if it’s an especially unique color or patterned snake.

It should be very easy to find banana ball pythons for sale, and your local breeder or pet shop should have a couple.

The best way to buy a snake is in person from a ball breeder. This way you can assess its health, taking into consideration clear eyes and a rounded body. You can also find out some first-hand information about care, which is valuable for a first-time snake owner.

Buying online is another good option. CB Reptile is a trusted and recommended site for a banana ball python purchase. This organization works solely with captive-bred ball pythons and is not involved with wild-caught animals at all.

Check out these incredible pictures of this stunning ball python breed. Notice how each snake has completely unique, yet equally striking colors and patterns.

Some are very light in color, resembling the albino ball python morph, yet retain the dark eyes. Notice the perfect patterns of some and the seemingly random splotches on others.

These morphs are undeniably beautiful.

See the pinkish-hue? That’s what makes these banana morphs so unique. This one was likely on the rather expensive side.

They can have all sorts of different patterns, too. This is likely a banana morph bred with another morph.

See the white line down it’s back?

Another breathtaking photo of a banana morph.

The above picture of a banana ball python morph is actually pied too. See the large pigmentless spot near it’s tail?

Bet this one costed a pretty penny.

Ball pythons tend to like being handled. They love the warmth of our warm-blooded hands.

Check out the below photos for more awesome pictures of bananas being held. Not the fruit… of course.

If you’ve been reeled in by the banana ball python morph and want to know about more variations, check out some of these:

These banana ball python morphs – or coral glow morphs, depending who you’re speaking to – are arguably one of the best pet snakes. Not only are they completely manageable, healthy, and calm but they’re affordable and stunning too.

Whether you’re starting your journey as a snake owner or you’re a lifetime enthusiast, these morphs are a worthwhile addition to your collection.