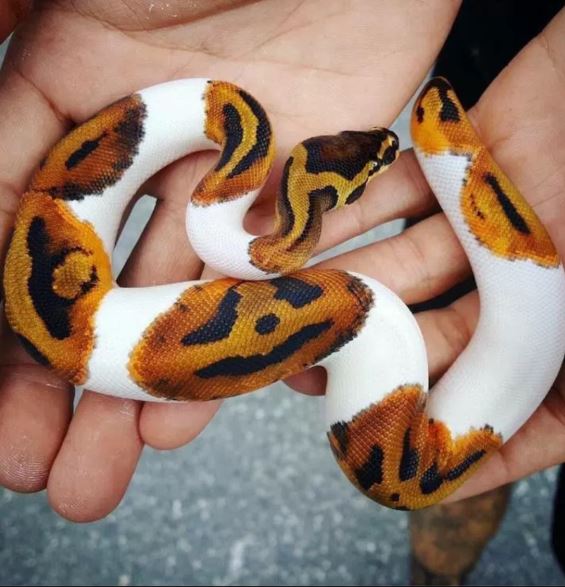 A piebald ball python morph, or a pied ball python, is an incredibly unique looking version of this fan-favorite pet snakes.

Ball pythons are one of the most popular pet snakes, largely because of their docile nature.

Also, this species has many different morphs, adding to the allure of this creature.

This morph, along with the spider ball python morph, is one of the original and earliest morphs discovered.

In our opinion, the Piebald Ball Python morph is a big reason why the ‘morph’ craze took off with this species.

What Does the Name Mean?

“Pied” doesn’t only apply to Ball Pythons, or snakes in general for that matter.

It’s a common trait that can be found across many different types of animals. Pied, or piebald, means a lack of pigmentation.

Hence, piebald Ball Pythons have big white splotches all over them. Technically, the natural color is the base and the ‘pied’ part is on top.

For example, a piebald ball python may have white scales, but isn’t entirely ‘white’ underneath.

Piebald is a recessive genetic trait. That means this morph is harder to breed, especially if you aren’t mating two pied ball pythons together.

As for how pied ball pythons become, there’s no real science to it. Some are more piebald than others.

You’ll see some piebald morphs that are almost entirely white, and others have a few smaller white splotches.

So, how do you get a ball python that’s more pied with little to no pigment?

It’s totally up to chance. Many breeders say that sometimes you get a unique, nearly entirely pigment-less baby, and sometimes the piebald is barely noticeable at all.

How Much do Piebald Ball Pythons Cost?

When it comes to the cost of a pied ball python, the price can range a lot.

This is mostly due to the fact that nearly any morph can be ‘pied’.

But, if you’re looking to get a standard piebald ball python, the cost will be in the $200-400 range.

That’s not too bad!

This is actually a “Mistic” morph with recessive piebald trait.

As mentioned above, many different ball python morphs can adopt the piebald trait.

Because of this, there’s a near endless amount of [insert morph here] pied ball python morphs.

You can see that this one has less of the pied features as the above snake. The lack of pigment from this trait is totally up to chance.

Meaning, some snakes will be more pied than others.

Check out this beautiful picture of a piebald ball python.

What a stunning ball python.

Not only does it have an incredible pied pattern, it also has jack-o-lantern looking swatches throughout it’s body.

This is an example of a piebald morph that would fetch in the $1,000s of dollars.

You can really see the contrast of the pigmented vs. non-pigmented scales in the above photo.

Just look at how immediate the color stops & becomes blank and white.

Amazing if you ask me.

This morph is nearly entirely pied.

The only pigment left is on it’s head, tail, and a little spot half way through it’s body.

Its’ really incredible how some of these morphs end up.

Check out the above picture of this happy little fella hanging out on a log.

This piebald ball python morph has fairly even pigmented scales all down it’s back.

Here’s an example of a pied morph that has very few scales with no pigment.

Not all piebalds have giant white splotches…

In fact, some have very few, like the one pictured above.

This thick pied ball python is all curled up, and has a giant white spot that extends for nearly half it’s body.

Lastly, this is quite the beautiful snake.

Another great example of a morph that has the pied feature. It’s part Pastel, and mostly pied.

This is a truly amazing creature, and it always surprises me how riveting these snakes can be.