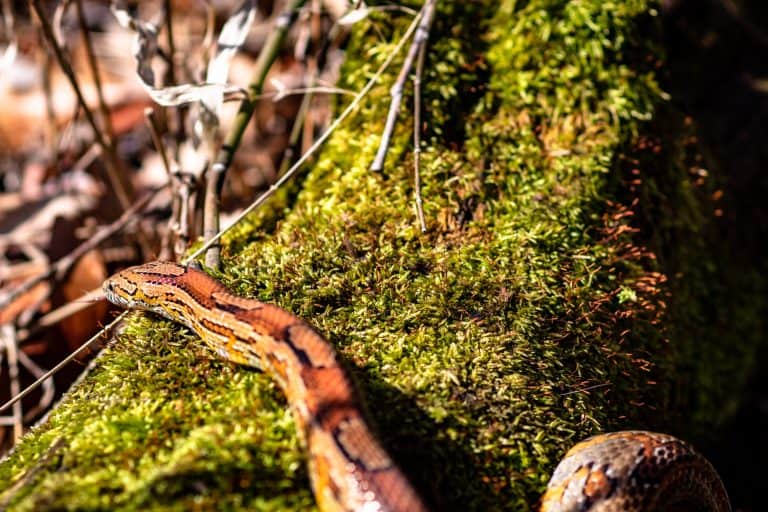 Getting bit by a snake. It’s an event that many fear, but is usually nothing to worry about. Especially when it comes to a Corn Snake bite. In captivity, Corn Snakes are typically docile and friendly. You shouldn’t ever have to worry about your pet Corn Snake biting you.

Corn snake bites are nothing to be afraid of. This breed of snake is relatively harmless, and bites so rarely happen when considering captive Corn Snake Pets.

In this post, we will cover everything you need to know about Corn Snake bites. Including: what to do if a bite happens, Corn Snake teeth, FAQs about Corn snakes, etc.

Thinking of a Corn Snake as a Pet?

They make great beginner snakes! Check out our ultimate guide to owning a Corn Snake.

What To Do if Your Corn Snake Bites You

First things first, don’t panic. The shock of being bitten is the scariest and worst part of being bitten by a Corn Snake. The bites are harmless, and if it happens, there is nothing to worry about. With that in mind, there are some things you need to know in the case that a bite occurs.

What To Do if the Snake Latches On

Corn Snakes are constricting predators that need to wrap around prey to kill it. Because of this, when they bite, some times Corn Snakes will latch on to you. This will probably not happen.

If it does, refrain from yanking the snake off. Resist all of your urges, and let the snake continue to latch on until it releases you.

Again, DO NOT YANK THE CORN SNAKE OFF IF IT CHOOSES TO LATCH ON!

If the Corn Snake bites and continue to latch on, you can do one of two things:

See? It’s not that big of a deal if you get bit. Usually, it’s just a little love tap, and you’ll have nothing to worry about.

Everything You Need to Know About Corn Snake Teeth

As mentioned above, Corn Snakes have small teeth that are angled backward. The reason for this is because it helps with two functions that are key to a Corn Snakes survival in the wild.

First, Corn Snake teeth are angled backwards because it helps them grasp prey better. Additionally, this helps them get a grip on their prey when setting their bodies up to constrict. Lastly, the angled back teeth help them keep a tight grasp on the prey as they are constricting to ensure that it’s meal doesn’t escape.

Another reason Corn Snake teeth are angled backwards is because it helps them digest the food once their prey is dead. Unlike humans and other mammals, Corn Snakes don’t really chew with their teeth. In fact, the teeth act more like little grips to help force the meal down in to a snakes belly. Corn Snakes use their entire body to force the food down, and the teeth help move the prey further along their gullet. That way, Corn Snakes can more easily digest and swallow their food.

How Many Teeth Do Corn Snakes Have?

Like many other non-venomous snakes, Corn Snakes have about 20-30 teeth. Corn Snakes typically have twice as many teeth on the roof of their mouth as opposed to the bottom part of their jaw. Additionally, Corn Snake teeth are aligned with 4 rows on top, and 2 rows on bottom.

Corn Snake teeth are sharp, small, and needle like. As mentioned above, this helps them grasp on to prey for constriction and it also helps with the digestive process.

Do Corn Snakes Have Fangs?

First, fangs and teeth are two totally different biological components that serve different purposes in snakes. Fangs are used for injecting venom and latching deep into prey. Snake teeth on the other hand, are mainly used for holding and digesting meals.

Consequently, Corn Snakes do not have fangs, they have teeth.

If you haven’t guessed it by now, no Corn Snakes are not poisonous nor are they venomous. That’s a big reason as to why they are such popular pets. Additionally, they do not have fangs, which are usually what dangerous snakes use to inject venom into prey.

Although Corn Snakes are not poisonous, if you get bitten by one, it’s best to take the proper precautions to treat the bite wound.

First of all, you probably won’t even feel it if you get bitten by a corn snake. The chances of it actually hurting are slim to none. Especially if you get bit by a corn snake baby. Baby corn snakes may playfully strike you because they don’t know any better. If it happens, you’ll likely only feel a small tap on your skin and nothing else.

If you get bit by a grown Corn Snake, it still probably won’t hurt all too much.

What does it feel like to get bit by a Corn Snake?

Nothing more than a little pinch, and maybe some blood will be drawn.

Although Corn Snakes aren’t venomous, it’s best to make sure the bite area is cleaned. Snakes tend to carry a lot of bacteria in their mouth, and if the bite draws blood, you’ll need to disinfect.

Some Neosporin or hydrogen peroxide should do the trick!

6 thoughts on “Corn Snake Bite – Does it Hurt? What to Do if It Happens”