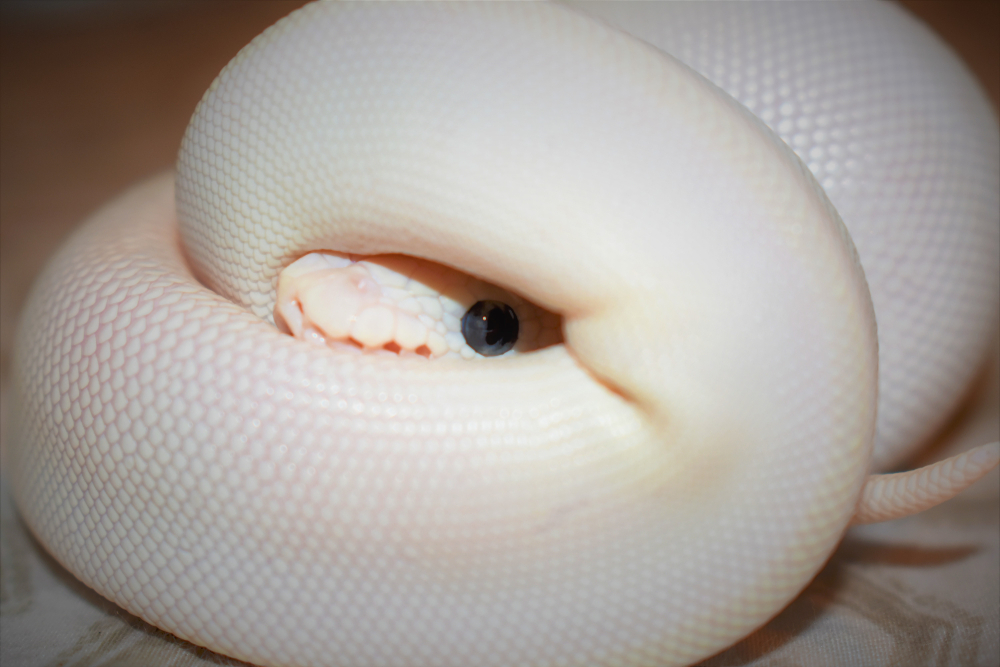 There is no doubt that the Blue-Eyed Lucy Ball Python is one of the rarest and most unique morphs out there. With its bright white scales and striking blue eyes, it really is a spectacular breed.

The unique combination of genes that this morph has is no easy feat to recreate. However, breeders have worked hard to perfect the genetic makeup to result in this exotic looking, one of a kind snake.

The icy blue irises are the trademark feature of this stunning white snake. While its body is usually pure white, as a result of the best genetic breeding, it sometimes has a beige stripe along the spine or is more cream-colored.

Any snake enthusiast, herpetologist, or reptile collector would love to add this prized snaked to their collection. However, it is also a great option as a first pet snake because of its classic Ball Python traits.

Here’s everything you need to know about the magical blue eyed lucy ball python.

So where does this morph get it’s a rather long and descriptive name from? You’d be forgiven for thinking that the Blue-Eyed Lucy Ball is an albino snake because of its completely white coloring.

But in order to be classified as an albino, the eyes would lack pigment. This morph’s eyes certainly don’t lack pigment, but its body does.

The Blue-Eyed Leucistic (BEL) Ball Python, affectionately shortened to ‘lucy’ has leucism. Rather than having little to no melanin production, such as with albinism, leucism is the absence of several different types of pigmentation.

This is why the BEL ball python morphs have sparkling blue eyes and occasionally the presence of coloration on their otherwise white bodies.

The Blue-Eyed Lucy Ball Python Morph is a result of complex genetics. It’s a combination of two morphs from a group of five viable breeds.

Five specific snakes possess the genetic makeup to create a leucistic snake and the trademark blue eyes with white scales.

Using two of these breeds to create a BEL ball python is the most sure-fire way. However, it still could take generations to result in the perfect BEL ball. The very specific mix of genes required can only be found in these five snakes.

The fact that they are so difficult to breed, and are almost an impossibility in the wild, makes the Blue-Eyed Lucy Ball Python a ‘designer morph’.

This designer python morph is, fortunately, one of the few that are not plagued by common genetic problems such as head wobbles.

The greatest danger is health issues such as anorexia, internal parasites, and respiratory infections that are associated with living in captivity. Ensuring that your python is well cared for and its living area well maintained will prevent these illnesses.

If you provide a clean and safe environment for your Blue-Eyed Lucy morph, it can live between thirty to forty years.

How Much Do Blue-Eyed Lucy Ball Pythons Cost?

The rarity, complex genetics, and striking aesthetic of this ball python morph make it one of the more expensive breeds on the market.

Most Blue-Eyed Lucy Ball Pythons are for sale for an estimated $700 to $1000, but can cost much more depending on their gender and coloration. And of course, this doesn’t factor in the cost of owning a snake.

Pure white BEL pythons with no color smudges or lines on their body are much more expensive than those with some coloration.

BEL ball python morphs can be difficult to come by. Your local pet shop is very unlikely to stock them, as they are so rare and difficult to breed.

Finding a reputable ball python breeder is your best bet. Especially if you’re looking for high-quality genetic makeup and a pure white snake.

Check out CB Reptiles for world-class Blue-Eyed Lucy Ball Python morphs. They work with only the best breeders and only sell snakes that are captive-bred, supporting ecological sustainability. Their BELs are a mix of Butter, Lesser, and Mojave genes, so you can expect a high-quality snake.

Here you can see why the BEL ball python morph is such a sought-after, prized morph. The contrast between its snow-white body and ice-blue eyes is simply unparalleled.

It’s hard to tell in this photo, but you can somewhat see the blue eyes on this lucy. It’s truly a stunning ball python morph.

What’s interesting about this genetic morph is that while many think it’s albino, it’s actually not. The eyes have pigment, hence why they’re blue.

Who wouldn’t want to boop that snoot?

This species tends to get pretty thick. While the BP in the above photo make look like it’s 10 feet long, it’s likely 3-4 feet.

You can truly see the radiant blue eyes in this photo.

Yet another photo that exemplifies the stunning blue eyes of a blue-eyed lucy.

Peekaboo! maybe the cutest little guy out there.

You are probably still reeling after the extraordinary photos of the Blue-Eyed Lucy morph. But if you’re on the lookout for some more epic morphs, check these out:

Adding the Blue-Eyed Lucy Ball Morph to Your Collection

Wow, the BEL morph is truly a genetically complex and magical reptile. Any snake lover would undoubtedly love to add this snake to their collection or begin their reptile journey with this incredible morph.

Of course, this designer morph is somewhat pricier than other, more common morphs. But you’re paying for the unique genetic makeup and rarity and it is well worth the price. The stark white scales and contrasting blue eyes are truly a sight to behold.