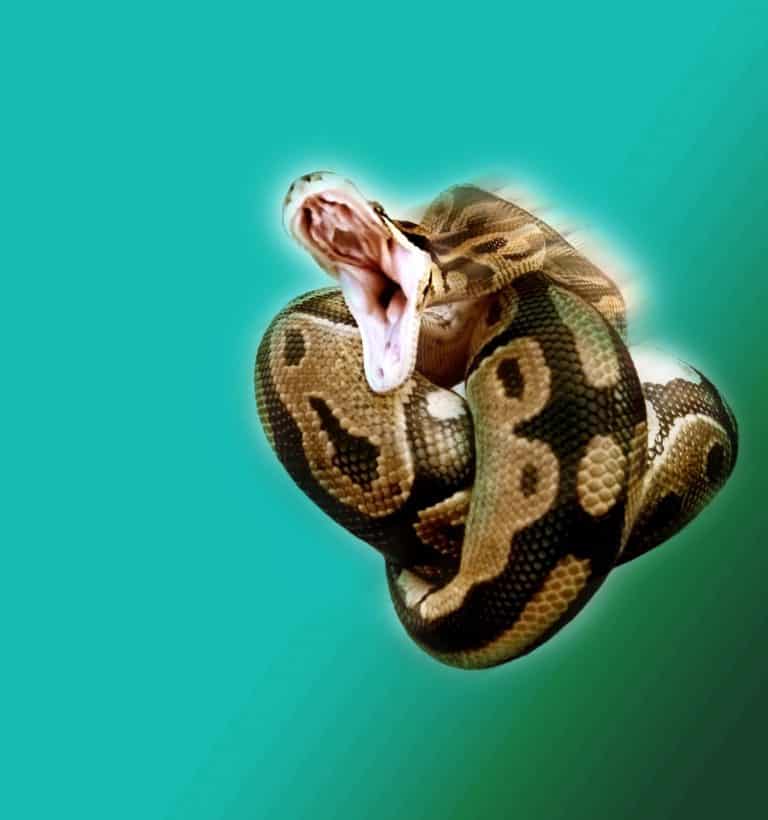 Dealing with a pet Ball Python bite is stressful and shocking. As a snake owner, you should expect this to happen.

That said, it’s not a great feeling when your loving Ball Python strikes you, your friends, or your loved ones.

The good news is that Ball Python bites are generally harmless and otherwise painless.

It’s more panic-inducing than anything else. If the proper steps are taken, the worst that will happen is a few drops of blood and a band-aid.

With that in mind, snake bites are typically a big fear to a lot of people. So, when a bite occurs, it can shake some people up and cause them to panic.

If you own a Ball Python, you should take heed to a few steps so you know what to do if a bite occurs.

Interested in owning a Ball Python? Check out our ultimate guide to Ball Python ownership to learn more.

Again, the mental shock of getting bit by a snake is usually more harrowing the the pain from the bite.

The best thing to do if you get bit is remain calm.

When a bite occurs, you’ll feel a pressure and squeeze in the afflicted area.

The grasp of a Ball Python bite is surprisingly strong, and the pressure from the bite is often more alarming than the damage that happens because of the bite.

Read on to see what exactly you should do if a Ball Python bites you or someone you are with.

What To Do When a Ball Python Bite Happens

Keep in mind, I am in no way a doctor.

If a bite happens and you are concerned it could become infected, you should absolutely consult a doctor for treatment.

With that said, here’s what you should do if a bite happens.

First, do not panic.

Becoming frantic, anxious, and scared will only make things worse. Animals, especially snakes, can pick up on emotions, and this will cause them (and you) more stress during an incident.

But, a bite can quickly become very painful if you don’t take the proper steps when it happens.

If the Ball Python bites you and latches on, DO NOT YANK it off.

Ball Python teeth are angled backwards, so they can latch on to prey more easily.

If you yank a Ball Python off of you, it will make the bite much worse and cause you more pain because you’ll likely rip more of your skin off by doing so.

Plus, you can also damage your Ball Python’s teeth by yanking it off.

Ball Pythons are known to latch on when they bite.

This is because they are non-venomous, constricting snakes. When they attack their prey, they bite into them and constrict to kill.

Removing a Latched On Ball Python

If you’re dealing with a latched on Ball Python there are three things you can try:

Just to clarify, you should visit a doctor to get recommended medical advice.

This treatment recommendation is based on experience alone, and if you’re worried about potential harm to your body from a snake bite or any other injury, consult a doctor.

Moving on from the disclaimer – here’s what you should do after a bite occurs.

First, Ball Pythons are not venomous.

You likely will not have to worry about a hospital visit, or anything of the sort.

After removing the snake from the bitten person, it’s best to wash the wound immediately with soap and water, then treat it with an anti-septic.

Neosporin, rubbing alcohol, or hydrogen peroxide should all do the trick.

Once washed and treated, bandage the wound (if needed or if skin is broken) and move on with your life.

Seriously though, Ball Python bites are nothing to worry about when you treat them properly.

Ball Python Teeth. How Many Do They Have?

Believe it or not, Ball Pythons do have teeth.

Quite a lot of teeth, actually.

The exact amount truly depends on the age and size of the snake. Now, there’s a difference between fangs and teeth.

Ball Pythons do not have fangs, and are not venomous at all.

Ball Python teeth are small, barb-like, and very sharp. They are all faced backwards toward the body of the snake. This helps with two things:

The teeth are all closely aligned in the roof and the bottom jaw. There are nearly double the amount of teeth on the top row vs. the bottom row in the mouth of a Ball Python.

Ball Pythons have 4 rows of teeth on the roof of their mouth, and 2 rows on the bottom part of their jaw.

Now do you get why it’s best not to yank a Ball Python off of you in case it bites and latches on?

All those little jagged teeth could do some serious damage if you try to force remove a latched on Ball Python.

Well first, snakes are not poisonous. Saying this can be a sore spot for many folks, and will likely stir up debate depending on who you’re speaking with.

Since snakes ‘inject’ their deadly liquids, they are technically ‘venomous’.

Poisonous creatures/plants don’t have any method of injection.

Rather, their poison is typically on the surface of some protrusion or area.

In any case, Ball Pythons are not poisonous or venomous, nor are any other species of snake that fall under the Pythonidae family.

So if you’re bitten, don’t worry.

There’s no muscle debilitating side-effects that will happen, and you will certainly not have to rush to the hospital for anti-venom.

While they aren’t venomous, Ball Pythons can sometimes have harmful bacteria in their mouths.

So, if a bite occurs, it’s still important to wash and treat the wound — especially if their has been a puncture and blood is drawn.

First things first, Ball Python bites from captive snakes rarely ever occur. It’s very uncommon that these snakes will bite you or someone handling them.

Now, there are some times when you should be more wary of disturbing Ball Pythons, as these are the most common times bites occur.

Below, you’ll see the exactly when you should avoid handling your Ball Python to prevent biting or striking.

Before or After Feeding Time

Most snakes are ornery when they are hungry and it’s close to feeding time. Consequently, snakes and Ball Pythons are typically vulnerable and defensive right after feeding, too. It’s best to avoid handling your Ball Python all together before and after they eat. Ball Pythons, and many other snakes for that matter, tend to strike during these times.

You should wait until the snake has had a bowel movement or the lump from feeding is no longer visible before handling again. This will reduce the chances of the snake being defensive and hence biting and latching onto a human.

During the Shedding Process

Snakes also become defensive around the times they are shedding. There are a few key giveaways that you will notice that indicate your Ball Python is ready to shed. First, if they are hanging out in their water bowl more than normal, they are preparing to shed. Second, if you see their eyes are turning blue, this is a dead giveaway that the are about to shed.

Ball Pythons will be come defensive during these times, too. It’s best to wait until a day or so after shedding to handle again. Sometimes, fresh snake skin can be sensitive, and they do not wish to be handled during this time.

It’s pretty easy to tell when your Ball Python is getting ready to strike you. Often times, they will strike when being picked up from their terrarium.

All reptiles have emotions, and there are some clear warning signs you can pick up on. One of the most noteworthy emotions a Ball Python can have is the strike position.

It’s a distinct stance that many snakes take when they are aggressive and about to attack.

Here’s what a Ball Python looks like when it is getting ready to strike:

If you see your Ball Python coiled up like this, avoid handling and try again later. This is a way of your pet telling you, “Not now. Don’t touch me”.

Overall, you should be fine if you are bitten by your Ball Python. Ofcourse, we hope it never happens, but it is unfortunately part of the joys of snake ownership.

Just remember, if you do get bitten, don’t panic. Gently remove your python, wash the bitten area with soap and water, and most importantly, make sure your Ball Python is OK!

44 thoughts on “Ball Python Bite – Does It Hurt? What You Need To Know”