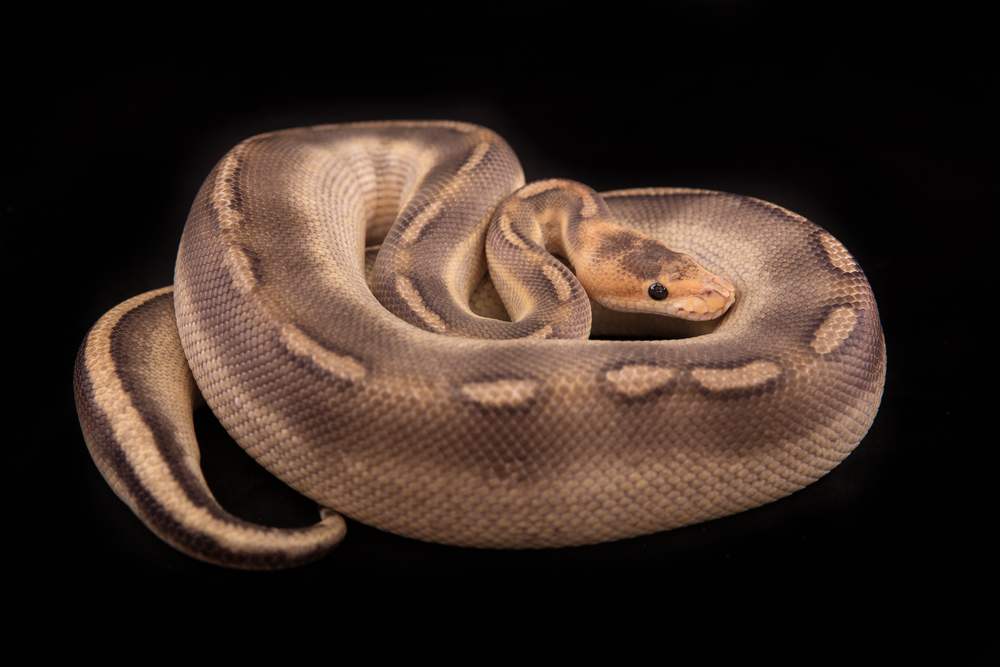 The standard Champagne Ball Python Morph – scientific name: Python regius – radiates a tan/orange color, or what some might describe as a champagne-like hue. While the Champagne isn’t overly common, they aren’t exactly rare, either. But they do make good first pet snakes if you are able to care for them properly.

The underbellies are white, but they have stripes or circles on their dorsal area, with a two-tone head. In terms of pattern, the Champagne can vary considerably. Whether adorned with a strip or with spots or seemingly random patterns, they are usually quite bright and vivid golden in appearance.

The colors and styling of the Champagne Morph suggest that it may be a popular option for mixing and exploring with other high-end combos and interesting new designer morphs. But  Champagnes can also mask other genes when breeding, resulting in washed-out colors and reduced patterns much of the time.

Here’s some more information around the Champagne Ball Python you may find interesting.

The Champagne is a codominant morph. This means that breeders can breed them out quickly if desired.

The Champagnes bred today were originally discovered in 2005 by EB Noah in Ghana.

A newer line of Champagne Ball pythons was discovered by Mike Wilbanks called the Pumpkin line.

It caused some excitement among fans when it was discovered because of its bright orange color which doesn’t come close to matching the brightest Champagne. Hence the birth of a separate Pumpkin Champagne line.

Champagne is a base gene. The snakes generally carry circles or rings or lines. Sometimes, a white ringer around the tale misidentifies it as a Pied.

Their dusky tone tends to carry through and wash out the patterns of the snake it is bred with So many offspring tend to have little color or pattern.

Champagnes cannot be paired with Spider Ball Morphs, Super Spotnoses, or Womas. The offspring tend to be lethal (stillborn or dying) due to neurological combinations.

Also, reports suggest that attempting to breed Super Champagnes tend to be lethal. Something to look out for in Champagne Ball Morphs is something called “the wobble”.

Champagne Morphs can display a condition known as the wobble. It is thought to stem from a  neurological issue affecting some morphs. Powerball, Spider, Super Sable and Woma are just a few of the other morphs in which the wobble has been observed.

Because Champagnes have a head wobble, most breeders do not recommend breeding them with other Ball Pythons prone to wobbles.

It manifests in a number of ways, and with varying intensity. Some wobbles are very mild and can only be observed as a slight tilt of the head. Other snakes may suffer from extreme full body twisting in unexpected or unusual ways.

It is also somewhat unpredictable in that there is no common trigger. Sometimes a snake may “wobble” only at certain times like feeding. Other times it could be seemingly random.

Sometimes, a wobble can be bad enough to impact a snake’s wellbeing. In most cases, though, wobbles can be mitigated with good care and preparation.

A healthy Ball python can easily live up to 30 years or more. It’s best to acquire one through an accredited breeder or dealer, as snakes bred in captivity they are more likely to be parasite-free.

Other than the aforementioned wobble, Champagne Ball pythons don’t suffer any serious hereditary or genetic illnesses. That said, like most other snakes, its health is largely dependent on how well it’s cared for.

If you are considering acquiring a Ball python, ensure that you can take the utmost care with its environment. Make sure you can keep humidity and cleanliness levels optimum for its habitat.

How Much Do Champagne Ball Pythons Cost?

The price for a Champagne Ball python can vary quite considerably. It largely depends on how rare a particular specimen is.

Expect to pay from around $200 upwards for a standard Champagne. At the top end, an Axanthic Vpi Line was recently listed at around $2500.

In terms of suitability, a young adult is always advisable for a first-time owner, even if it tends to be a bit more expensive. Hatchlings can be cheaper, but generally require more experience to rear.

Champagnes have picked up in popularity over the last few years, and it shouldn’t be too difficult to track one down through a breeder or exotic pet store.

It’s always best to try to acquire snakes from a reputable breeder. Breeders tend to know the intricacies of the breeds, can advise in detail about care and what to expect, and sometimes offer the best specimens anyway.

You can also try online, at stores like CB Reptile. These stores work only with captive-bred snakes and do not deal in wild-caught specimens.

Take a look at these amazing images of these beautiful Champagne Ball pythons. You can see the gorgeous golden tinge that gives the snake its name, as well as the two-tone head.

Note that each snake – as mentioned, carries a different pattern, rings, or stripes, making each quite unique in look.

I mentioned the Piebald earlier. If you’re keen to read about them or some other Morphs, take a look at these articles.

In general, Ball pythons require a bit of special care and attention. But they also make good pets for those who are able to care for them properly. Even relatively inexperienced owners can do well with them over 30 years or so.

Finding a Champagne Ball Morph shouldn’t be too much of an effort. The hard part will be deciding which one appeals to you in terms of its color and personality. Investigate the options and enjoy your Champagne!