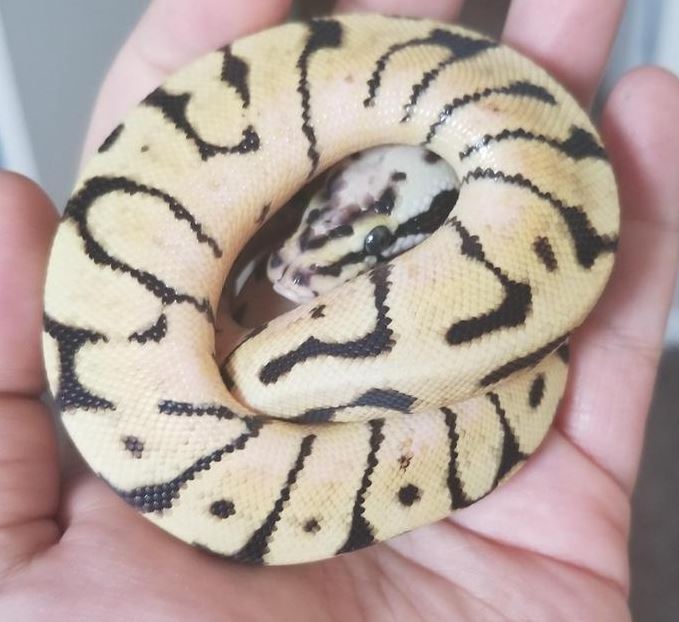 The Bumblebee Ball Python morph is a really popular one due to the unique, black and yellow colors.

Like we say a lot, Ball Pythons are one of the more popular pet snakes, mainly due to their calm demeanor and the variety of different morphs available.

There’s truly a morph out there for everyone.

So, does the Bumblebee Ball Python Morph suit your fancy?

It’s time to find out!

Unlike some dominant morphs that were found in the 90’s, this is actually a “designer morph” that was discovered in the mid 2000’s, sometime around 2004-2006.

As mentioned above, the Bumblebee Ball Python morph is not an original, ‘dominant’ variety.

In fact, this is a designer snake that derives traits from several different types of morphs.

First, the dominant genetic of this morph is the Spider Ball Python Morph.

There are also two co-dominant morphs that are embedded into this snakes genetics:

So, to get a Bumblebee morph, you’d have to breed a Pastel + Spider.

Technically, if you breed a Enchi + Spider, you’ll get a “Stinger Bee” morph. It’s slightly different from a Bumblebee morph, though the differences are subtle.

Since this morph is created from the Spider dominant, it is known to have some health issues.

Wobble is a very common defect of Spider morphs, and this can be passed along to a Bumblebee morph as well, though it won’t be as prevalent.c

How Much Do Bumblebee Ball Pythons Cost?

Like many BP morphs, the Bumblebee Ball Python will typically range between $200-$300 depending on who you buy from.

That said, some of the more ‘designer’ bumblebee morphs can get quite expensive. Some are even known to get into the $1,000’s of dollars.

Where to Buy One

Since this is a fairly common morph, you may be able to buy one of these at a local pet store.

Another place to find Bumblebee Ball Python Morphs for sale is on Facebook marketplace, Craigslist, or a local breeder near you. Typically, you can find local breeder on those two above mentioned platforms.

You can also find Bumblebee morphs for sale at local reptile expos.

Lastly, there are plenty of Bumblebee morphs for sale on the internet. We like Morphmarkets because you can find a ton of variety on that site.

Plus, most of the listings are from small, local breeders.

Bumblebee’s have a stunning contrast between black and yellow.

Typically, the yellow will be the primary color on this morph.

Also, this guy looks totally adorable curled up in his owners hands.

Some Bumblebee Ball Python’s have a lighter yellow, and some darker.

Also, some different morphs will have a solid black line down their back, and some will have a more broken up “web” look.

Look how cute this little snoot is.

Ball Pythons aren’t the only snake with the “pits” on it’s face. In fact, most snakes in the Python family take on this trait.

It helps them with hunting and acts as a heat detecting sense.

Ball Pythons love to take a nice soak before shedding.

Just look at the beautiful designs on this Bumblebee.

Sometimes, this morph will take on a lighter, more pale yellow color.

Strangely, Bumblebee Ball Python Morphs have their pattern extend to their underbelly.

Many times, snake bellies are white.

In this case, Bumblebee’s tend to have a light-yellow color with the black stripes found around the rest of their body.

This Ball Python may be showing signs of wobble.

A common side-effect of wobble is the snake looking up in the air as above. That said, this guy could just be acting funny. It’s hard to tell if this is a result of wobble or not.

This cute ball python has a very light base color, and is coming out to say hello.

All coiled around his little branch guarding his gnome hut… Ball Pythons are truly amazing creatures.

Also, this Bumblebee morph has a more distorted base yellow color. It’s not as pure as some of the above ones, adding to it’s beauty.

This little fella has a coiled up tail and is stretching out on the hardwood.

If you look closely, you’ll see the eyes are a pale green color.