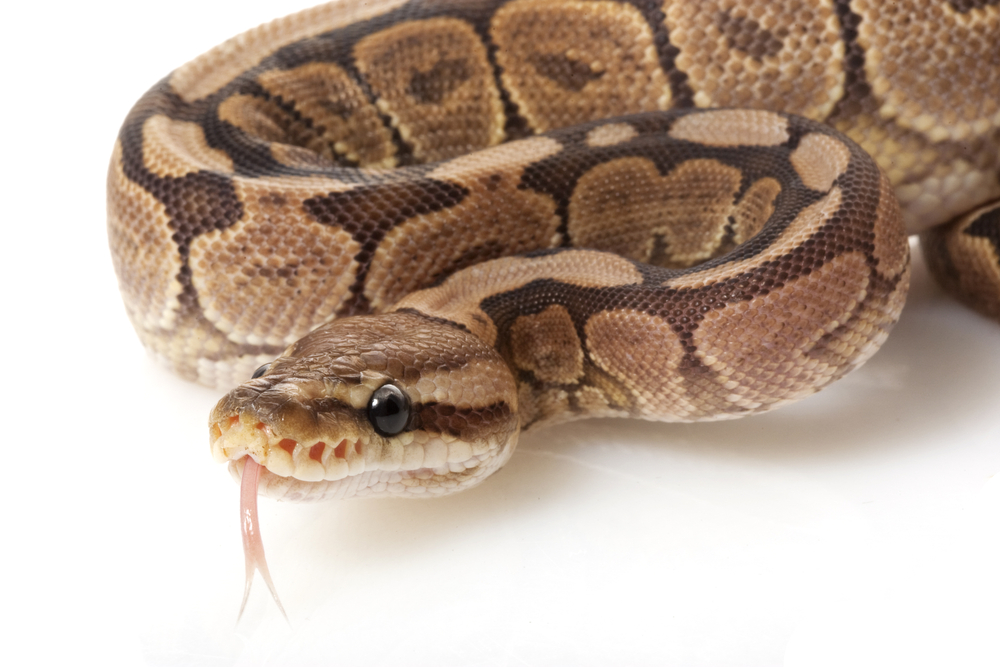 They’re docile and calm creatures and grow to a maximum of 5 feet, which is big enough to be impressive but not unmanageable.

And while there are chances of being bitten, as all snake owners eventually experience, the ball python bite is harmless and relatively painless.

For instance, Cinnamons are usually much darker, with some blushing on their dorsal body and a reduced alien-head patterning. The underbelly has much more white coloring and their lips are grey.

You will notice a huge variation in different Cinnamons. Some will be more red-brown in color while others will be almost black. Their genes are fantastic to mix with other morphs to produce a range of interesting breeds.

Find out everything you need to know about the incredible Cinnamon ball python morphs here!

The Cinnamon gene is co-dominant which means that the offspring inherits two alleles that have incomplete dominance.

This means that the hatchlings will all be very different, with 25% looking like their mom, 25% looking like dad, and the rest mixed. You can imagine that it allows for some incredible combinations.

Cinnamon ball pythons are basic morphs, but they produce a range of incredible designer morphs. When mixed with other breeds, the Cinnamon gene adds a darker color which often comes out as purple.

Now there are tons of designer Cinnamon morphs, which are morphs that have an almost 0% chance of occurring in the wild. Cool breeds include the Cinnamon Leopard Pastel and the Cinnamon Mahogany.

The Most Misidentified Ball Python Morph

Out of the thousands of ball python morphs out there, the Cinnamon ball is without a doubt the most misidentified.

Around 15 years ago, when the morph craze began, there was an obsession with trying to create a completely black snake. It was discovered that breeding two Cinnamons, now called a Super Cinnamon, produced this coveted black snake.

The same was discovered about Black Pastels, and so breeders started mixing Black Pastels with Cinnamons, to get an entirely black snake.

The Cinnamon and Black Pastels look so much alike already, but when breeding them furiously to create black snakes, the offspring became very difficult to identify. This led to many cases of name switches between the two snakes, which has carried on for an entire family line.

To the untrained eye, it’s very difficult to spot the minor differences between the two morphs. If you’re looking for a pet, misidentification doesn’t pose an issue.

However, if you’re looking for a Cinnamon ball python to breed, you need to be aware of the possible misidentification.

Basic Cinnamon ball python morphs do not suffer from any genetic problems, as they are naturally occurring morphs.

However, overbreeding of the Cinnamon gene to produce black snakes has plagued Super Cinnamons with some genetic disorders.

Super Cinnamon hatchlings may present a number of genetic issues. These include bug eyes, which are slightly larger eyes, and duckbills, which is when a ball python’s mouth appears flat. Another common problem is kinking, which is a spinal deformity.

If you’re considering purchasing Super Cinnamon or breeding two Cinnamons, look out for these problems.

Otherwise, with proper ball python care, your Cinnamon ball python morph will likely live a very long life. The average lifespan is between 30 to 40 years, so you’ll have a lot of time to enjoy it.

How Much Do Cinnamon Ball Pythons Cost?

Buying a basic Cinnamon ball python morph is really inexpensive. These morphs are pretty common and their patterning, which is very similar to a normal ball, is not so unique that the prices are extortionate.

Of course, if you’re after a Cinnamon designer morph, the prices are much higher.

You can pick up a Cinnamon ball python for as little as $75. Keep in mind that age and gender have a slight effect on price. However, even an adult female is very affordable at around $95.

A Super Cinnamon is much more expensive, at around $450 and some very unique Cinnamon morphs can be upwards of $1000.

These morphs are quite common, so you may be able to pick one up at your local pet store. However, it’s always best to purchase your ball python from a reputable breeder.

This is especially important if you’re concerned with picking up a Cinnamon ball that hasn’t been slapped with the wrong name and is actually a Black Pastel morph.

If you don’t have the contact of expert breeders, check out CB Reptile. They work with only the best breeders and have a number of awesome designer morphs available.

Check out these Cinnamon ball pictures and notice how diverse this breed can be. Some Cinnamons are extremely dark, while others have a much more distinct reddish tone.

Look out for the telltale blushing. This is the faded color gradient that you can see on its back.

Are you fascinated by the Cinnamon ball morph and want to see some more? Check out these unique morphs that are sure to blow your mind.

Getting Your Own Cinnamon Ball Python Morph

Ball pythons are such cute snakes. Yes, I said it, even though ‘cute’ isn’t a word most people associate with snakes. The way they curl up into a ball, their calm temperament and their beautiful patterns can be pretty adorable.

The Cinnamon ball morph is a classic ball python morph, with mesmerizing reddish undertones and that cute ball python nature.

It may not be the most exciting morph out there, but its genetic potential is limitless and it is a fantastic snake for first-time owners or long-time collectors.