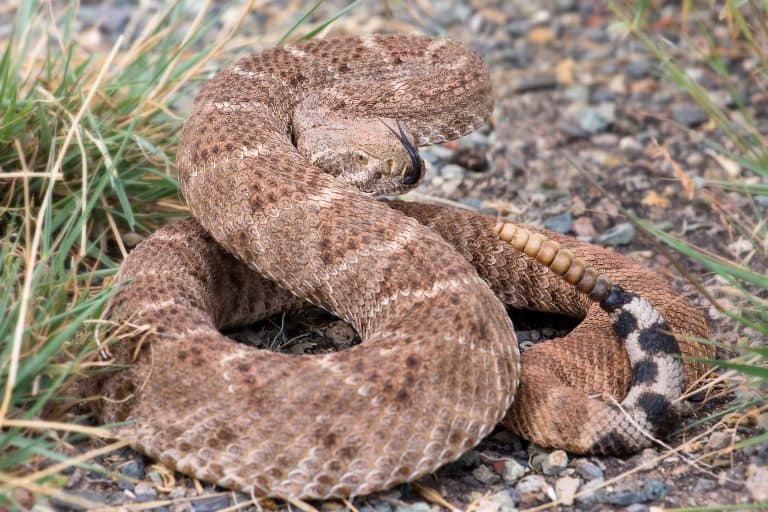 Many would likely ask, “why in the world would anyone want a rattlesnake as a pet!?”

While it seems crazy to some, it may not to others. Believe it or not, there are many responsible (and some irresponsible) enthusiasts out there who really love keeping venomous snakes as pets.

You can even ship a venomous reptile to certain states in the US.

In any case, we will cover all of those topics and the specifics as to where you can and can’t own a pet rattlesnake. They are incredibly tricky pets to own and are definitely an uncommon one too.

Should You Get a Pet Rattlesnake?

No. You should not get a Rattlesnake as a pet. While owning a snake as a pet is an endearing experience, owning venomous ones is a whole different story.

The every-day snake owner is much better off with a non-venomous species. For reference, you can check out these best pet snakes for beginners.

There are a number of reasons as to why rattlesnakes, or any other venomous snake for that matter, are not good pets.

It kind of goes without saying. Rattlesnakes are an incredibly dangerous animal. First, most rattlesnakes have life-altering venom that can kill humans if not treated immediately.

Yes, there is anti-venom out there for just about every species of rattlesnake, but that doesn’t mean they should be kept as pets.

Generally, venomous creatures do not do well in captivity. Additionally, having a venomous pet like a rattlesnake endangers just about anyone who walks into your house.

That’s another story — if you do have a rattlesnake in captivity, you should not have it in your home.

Just image, someone walking into your house and gets unexpectedly bitten by you pet rattlesnake that escaped. Not only would you likely lose a friendship, you could be facing a hefty lawsuit and hospital bill as well.

Rattlesnakes Can Be Unpredictable

Unlike nonvenomous reptiles, rattlesnakes can be highly unpredictable.

Most pet snakes are constricting or foraging snakes. Meaning, they don’t rely on venom to debilitate their prey.

So, what does that mean for rattlesnakes? They need to be able to strike lightning fast to deliver venom to their meal.

You see, with regular non-venomous snakes, you can almost see a bite coming and likely avoid it. On the other hand, rattlesnakes have a split-second strike and can strike a distance that stretches nearly the full length of their body.

They can strike on a moments notice, and even if you take extra precautions, you can be bitten by a highly dangerous rattlesnake in a blink of an eye.

Pet Rattlesnakes and Vipers Can Be Boring

Yes, you got that right.

For many aspiring snake owners, a big part of owning a pet snake is being able to handle it and share that experience with other people.

So, with a rattlesnake as a pet, you can count out being able to handle it without gloves and a snake stick.

All you really get to do is look at it. And while that may be fun for a few select people, it can get boring pretty quickly.

Unfortunately, some ‘bored’ snake owners are known to release their pet snake into the wild. That can be quite dangerous, especially if someone were to release a highly venomous, non-native species into the wild.

In essence, if you want a pet that can be handled regularly, a rattlesnake is likely not a good option for you.

Where is it Legal to have Rattlesnakes as Pets?

The legality of snake ownership below may not be the most accurate and up-to-date info. The info was gathered during the publish date of this article, and you should double check your state/local laws before purchasing a venomous snake as a pet.

No Permit Needed for Ownership

Permit Needed for Ownership of Rattlesnakes

Where to Buy Pet Rattlesnakes

So, now that you know you can have a rattlesnake as a pet, where does one acquire this deadly beast?

Well, the answer may or may not surprise you.

You can actually order a pet rattlesnake on the internet, and it will be shipped to you… crazy, right?

Believe it or not, in some states you are allowed to ship and receive venomous snakes. That means rattlesnakes, vipers, and other venomous serpents can be packaged up and sent to a new destination.

So, just how does this work?

Well, standard carriers like UPS, USPS, and FedEx strictly prohibit the shipping of live reptiles. But, airlines on the other hand will happily ship reptiles of any sort, as long as the proper packaging is adhered to.

If you’ve ever flown on a commercial jet, chances are your checked bags may have been next to a crate of deadly snakes.

*cue Snakes on a Plane Jokes*

Yes, you can ship venomous reptiles on a Delta flight. But who sells and ships venomous snakes?

For one, a website called Underground Reptiles does. In fact, as we are writing this post, there are several extremely dangerous pit vipers up for sale.

Another likely place that will sell you a pet rattlesnake is a local breeder. Often times, breeders will have many different species, and sometimes they will have venomous selections.

While we highly encourage you not to buy a venomous reptile, it’s probably more available than one would think.

If you do want to buy a rattlesnake as a pet, we’d recommend going this route. That way, the breeder can talk you out of it.

Jokes aside, a breeder will likely be able to give you a lot of pointers and suggestions on how to keep and maintain a venomous pet. Otherwise, blindly buying a highly dangerous serpent on the internet could end poorly.

So, if you do want a pet rattlesnake, seek the advice of an expert, especially if you don’t know what you’re doing.

Advice for Owning a Pet Rattlesnake

In Most Cases, Don’t Do It

Just don’t. Unless you’re a serious enthusiast and have a lot of experience handling these snakes, it’s likely a bad idea.

First, venomous reptiles should generally be left alone. One of the only justification for having these fellas is for a private zoo, or a private collection for some kind of serpentarium.

Other than that, having one in your house is a little crazy. But, as a snake person, I can understand this craziness so here are some general precautions you’ll need to take if you truly want a pet rattlesnake.

Rattlesnakes have an incredible striking distance and can strike in a split second without warning. Needless to say, you absolutely should never handle your pet rattlesnake with your hands.

Because rattlesnakes have a striking distance about the length of their entire body. For example, a 3 foot long rattlesnake could strike you from about 3 feet away.

Keep Pet Rattlesnakes Out of Your House

If you have a rattlesnake as a pet, please don’t keep it in your bedroom… or even your house, for that matter.

We highly suggest you find a space for your snake in a temperature controlled garage/shed or guest house. Better yet, keep it at an exhibit or don’t get one at all!

Just imagine if it got lose in your house; your whole family would be in danger.

The last thing you want is for a pet rattlesnake to be on the lose in your house and to not know where it is.

Make Sure Your Pet Rattlesnake is Secure

This kind of goes without saying.

You’ll definitely need a near airtight terrarium for a pet rattlesnake or any other venomous reptile. Of course, there should be some ventilation, but you’ll need to be absolutely sure there are no loose corners or unsecured mesh lids.

In fact, it’s recommended to get a terrarium with a lock on it. That way, you’re the only person who would be able to access their enclosure, effectively protecting anyone who may infiltrate the deadly beast’s habitat.