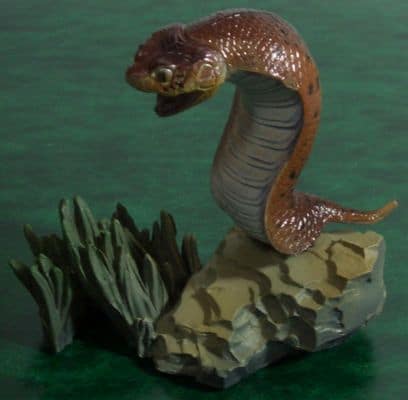 A somewhat esteemed, strange Japanese folklore that has become popular around the internet and has made some guest appearances in various video games.

So, what the heck is it?

That’s what we’re here to talk about.

The Tsuchinoko is a strange, serpent like being that has been talked about in Japan since ancient times. It’s kind of like a mythological creature or being, similar to what you’d find in the Iliad.

Except, it’s not quite as intimidating as some of the more beastly Greek mythological creatures like a Chimera or a Harpy.

Truthfully, the Tsuchinoko is a funny little guy. Below, we are going to break down everything you need to know about the creatures.

We will talk about what it looks like, where it comes from, and where it appears in our modern world.

Oh, and did we mention the Tsuchinoko has a thing for booze? It may just be more like us than we think.

Origin of The Mysterious Japanese Creature

It’s unclear the exact origin of Tsuchinoko. First, Tsuchinoko is a more commonly used name for the mythical beast in Western Japanese culture.

On the other hand, in Eastern Japan, the strange creature is usually referred to as “bachi hebi”.

It is a type of Cryptid, which is a group of creatures that are unsubstantiated and likely not real. To add context, Bigfoot and the Lochness Mosnter are both fall under the Cryptid catergory.

What we do know for sure is that Tsuchinoko has been in Japanese culture for quite some time.

In fact, the mythical creature has been referenced throughout history as far back as 10 centuries ago.

Believe it or not, Tsuchinoko was mentioned in the Kojiki, the oldest chronicle of Japanese myths and stories known to man.

If it’s one thing we know for sure, the Tsuchinoko has been around for a very long time, and it isn’t going anywhere anytime soon.

The stocky little fellow apparently grows to be between 30-80 cm long, and gets quite girthy, too. So, it isn’t all that large, but it has some other fairly terrifying qualities.

Although it’s quite funny looking, this Japanese snake-like creature has some pretty scary attributes.

First, the Tsuchinoko can jump up to three feet in the air. That’s pretty high up for a portly little snake with shrimpy legs. Additionally, part of the common folklore around this creature is that it can “double jump”.

That’s right. After it has jumped three feet from the ground, whilst in mid air, it can propel itself another three feet above that.

Other than it’s physics-defying ability to jump, the Tsuchinoko has several other qualities that may strike terror in those who encounter it.

Second, the Tsuchinoko apparently has a viper like venom coupled with two long fangs in the roof of its mouth. It is said to be very dangerous, and the venom is similar to that of a viper.

Viper venom is deadly, so we have to assume that if bitten by Tsuchinoko, the outlook doesn’t fair well for the victim.

Lastly, the mysterious beast is mostly depicted as having a brown, black, and gray patterned color. Oddly, some writings claim that the strange serpent has a bright orange underbelly.

It also has 4 small legs, and scurries around like an overweight looking lizard.

The Behaviors of Tsuchinoko

Likely the most interesting behavior of Tsuchinoko is it’s liking of alcohol.

That’s right. Among the many other oddities of this mysterious Japanese Cryptid, it enjoys blowing off steam via boozy brunches and liquid lunches.

It’s also known for it’s devious, thief-like behaviors. So, keep your locks locked on your liquor cabinet and beware of Tsuchinoko stealing all of your alcohol.

Additionally, the odd and likely fictional reptile is thought to make all sorts of weird sounds. It squeaks, squeals, and chirps. To make things weirder, it can also speak the common tongue of it’s native location.

No surprisingly, Tsuchinoko is a known liar and is deft in deceit.

With that in mind, be sure not to fall for any of it’s tricks. There’s really nothing good about these devious creatures.

Lastly, it is know to take on a wheel shape by biting onto it’s tail.

That way, this ever strangely growing creature can travel quickly down slopes and navigate faster beyond it’s shrimpy four legs.

In Popular Culture, Media, and References

Tsuchinoko has appeared in many pop culture and media references over the years.

Back in 2017, the strange beast went semi-viral on the popular social media platform, Tumblr.

Throughout the decades, it has often been referenced in video games and various card games.

Now, Tsuchinoko never really takes on a significant role in any games. It’s usually some kind of monster to kill or capture, or is the inspiration for some kind of other creature.

Here are a list of popular video games where Tsuchinoko is known to be mentioned:

It’s been over 1200 years since Tsuchinoko was first talked about, and there have been no recorded sightings or studies made on the creature.

Chances are, no Tsuchinoko is not physically real.

That said, it is very much so real in the sense that Tsuchinoko is a novel idea and creature that has lived “with” us for hundreds of years.

It’s more of a representation of a certain type of person, evil, or impediment to our lives.