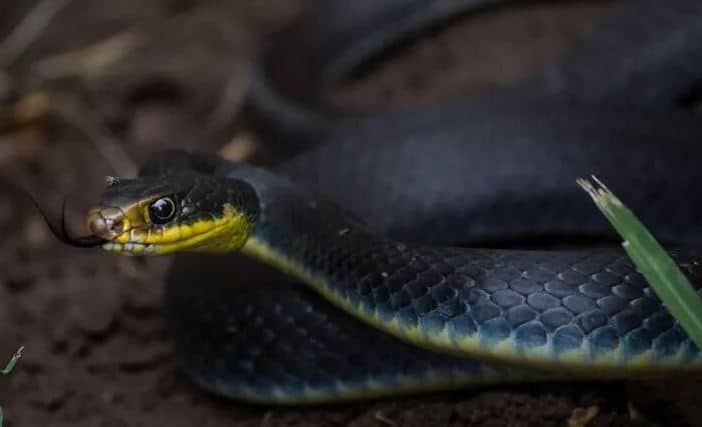 There aren’t that many blue colored snakes out there in the world. In fact, there are very few.

One of the most vibrant blue snakes you’re going to learn about today is called the Blue Racer Snake.

In this post, we will cover in detail everything you need to know about this species of snake.

If you’re into herping, you’ll definitely find out where to go looking for one of these fellas in the wild.

Also, you’ll get to see some beautiful imagery of this species. We compiled a gallery of Blue Racer pictures that you have to see. Once you see the photos, you’ll get a much better idea of why these amazing snakes earned their name.

Plus, if you’re thinking of capturing one in the wild or owning one as a pet: think again.

There are several reasons why these aren’t the best choice of pet snake and we’ll cover them in detail later on. These reasons have to deal with the general behavior of the snake, it’s eating habits, and the state of this species as a whole.

The scientific name for this species is the Coluber constrictor foxii.

Technically, the Blue Racer is a subspecies of the Coluber constrcitor, which is a species of nonvenomous snake commonly referred to as the Eastern Racer.

There are a several different subspecies of the Coluber constrictor, many bearing the name “Racer” in it’s non-scientific name. In general, Racers are all incredibly fast and have similar eating habits.

Speaking of speed, If you wondered why they have the name, “Racer”, well, it’s because these snakes are incredibly speedy.

In fact, the Blue Racer Snake is quite possibly the fastest snake in the Americas. There is some debate over this fact, as some individual snakes are faster than others.

The leading contender for fastest snake in the US aside from the Blue Racer is the Coachwhip.

In any case, Blue Racer Snakes have been clocked going nearly 4.5 mph, or 7.2 km/hr. That’s pretty fast for a snake!

When threatened or on the hunt, these snakes will speed a long with their heads slightly lifted off the ground. Also, if intimidated, they are known to shake their tail at you to try and imitate a rattle snake.

If you chance to come upon one of these snakes, and it shows signs of defense, it’s best to stay clear! Although Blue Racers are non-venomous, a bite from one of these speedy snakes would definitively be unpleasant.

Where are Blue Racers Found?

Blue Racer Snakes are native to North America. They cannot be found anywhere else in the world. Specifically, these snakes are located mostly in central and mid-western American states.

In a past life, Blue Racers also inhabited parts of Canada. In fact, they were quite common. The Blue Racer snake population has dwindled since there has been significant development of the lands the snakes used to roam.

The last known sighting of these snakes in Canada happened in Ontario circa the mid 1980’s. So, they have only known to inhabit the United States for over 3 decades.

There are several states that are known to inhabit the Blue Racer snake. They are most likely to be found in the following: Iowa, Illinois, South Dakota, Kentucky, Ohio, Michigan, Wisconsin, or Indiana.

If you’re looking to spot a Blue Racer in the wild, good luck. Other than their limited native geography, there are several other reasons why these snakes are hard to come by.

First, Blue Racer Snakes despise humans and tend to stay far away from areas that are being developed. In essence, they are mean snakes who do not like to be meddled with. They prefer to be left alone.

Because of these preference, they tend to avoid human contact and hide in plain sight. Additionally, since they tend to stay away from developed areas, you’ll have to go pretty far in the wild of one of the above mentioned states to spot one.

Lastly, the population of this species of snake is depleting due to an increase in development over the past century. They prefer certain settings, and not many of those settings are around anymore.

While these snakes are beautiful, they are challenging to locate. If you do chance upon one, be wary of how close you get. They tend to be quite aggressive towards attempted human contact. It’s best to stay a close distance as not to aggravate the snake and cause a potential bite.

As mentioned above, these snakes are rather difficult in the wild. That’s because they prefer that natural wilderness. Chances are, you won’t be finding any of these slithering around the local park.

More human density = less likelihood that there will be any Blue Racers in the vicinity. Since the Midwest has been growing fairly rapidly over the last several decades, it grows harder and harder to find these types of snakes in the wild.

If you noticed, many of the states where these snakes are located are places with large open fields and savannas. That’s because this species prefers a grassland type environment.

Usually, a Blue Racer snake will stay contained to an area of about 25-30 acres. They prefer non populous spaces, and they tend to stray away from areas with houses, buildings, and other construction.

Also, these blue snakes aren’t that territorial. Usually, if you see one, there are others around. The hardest part is finding one in the first place.

Unlike constrictor snakes like White Lipped Pythons, Blue Racers are active forager snakes. That means that instead of wrapping around prey to kill it, this species eats more frequent, smaller meals.

Often times people are thrown off by this species’ scientific name, Coluber constrictor foxii. The name implies that the snakes are constrictors. However, they are not.

Thus, the typical meal of a Blue Racer consists of small prey located on the floor of a grassland environment. Adult Blue Racers aren’t big climbers, so they typically won’t go up any trees or climb structures to hunt. That said, these snakes typically hunt small mammals, frogs, lizards, and other prey common to the floors of grasslands.

The mating period for Blue Racers is a relatively small window that typically takes place in early Spring. Usually the mating season lasts about two months, starting at the beginning of April, going into the end of May and sometimes the beginning of June.

During mating season, Blue Racers who are about 2-3 years old are the ones active in reproduction. That’s because at 2-3 years old, these snakes have reached sexual maturity.

Once insemianted, females will lay anywhere from 5-7 eggs, all the way up to nearly 30 eggs at one time. That’s a lot of little Blue Racers slithering around!

The eggs are long, skinny, and leathery — unlike your typical chicken or bird egg, these eggs are softer.

When hatched, newly born Blue Racer snakes typically range around 7-10 inches long (17-25 cm). Strangely, these snakes often mate and lay eggs communally, and sometimes with other species. It’s not uncommon to find several Blue Racers and other similar species together mating and laying eggs in one large nest.

Nests are usually located in secluded spaces along the grassland/forest floor. Often times, they are found in old rotted out logs, piles of brush/sticks that have accumulated over time, under large stones, and in natural “Caves” made by rocks and boulders.

If you haven’t guessed already, these snakes get their name from their color and their speed.

There are three big reasons why these snakes are popular ones to find by those who enjoy herping.

First, they give off a brilliant blueish hue and are one of the only species of snakes to do so. Secondly, they are fast and truly beautiful snakes. Lastly, they are hard to find, making it that much more alluring to try and admire one in the wild.

In any case, Blue Racers have grayish color scales down their spine, and the area between their belly and back tends to be an exuberant blue color.

This is where the snake gets it’s common name from. Also, their underbelly is a creamy white color, making for a lot of beautiful contrast.

Blue Racers also have a golden/brownish nose and snout, paired with rather smooth scales all around it’s body.

As mentioned above, juveniles are born at about 7-10 inches long (17-25 cm). That’s a fairly standard length for newborn snakes. When they become full grown, Blue Racers full length can be anywhere between 34-65 inches (86-165 cm) long.

This snake lives a relatively long life compared to some other species. On average, the Blue Racer Snake lives anywhere between 14-21 years. Their lifespan is longer because of how anti-social this species can be. In fact, they tend to avoid human contact at all costs, and usually slither quickly away from predators. Hence, Blue Runner Snakes tend to have longer lifespan in the wild than other species of snakes.

Pictured above is a Blue Racer coiled up on some brush. That’s one angry looking snake — better not get too close.

Surprisingly, this baby is being held in the palm of someone’s hand. You likely wouldn’t be able to handle an adult Blue Racer, though.

Typically, this would be the last view of a Blue Racer in the wild before being struck by one.

So, are these quick snakes feasible to capture and own as a pet? Short answer: No.

This species does not make a good pet snake. As mentioned above, Racers are typically aggressive towards humans and dislike the presence of other animals.

Usually, snake owners want to develop some kind of relationship with their pet snake. Most common species like Corn Snakes and Ball Pythons tend to be docile and are more than willing to be handled.

On the other hand, Blue Racer Snakes are the type of species that absolutely do not like to be handled. Additionally, they can be quite aggressive towards humans and would likely strike if one were to get too close for comfort.

Lastly, there are conservation concerns with this species. It’s not quite ethical to own a threatened species. Since their population is on the decline, it may not be the best idea to own one of these snakes as a pet.

To cap things off, you will likely never find a breeder who breeds Blue Racers in captivity.

So, even if you did want one as a pet, you’d have to capture it in the wild. Since they are hard to find, and it’s generally frowned upon to own one as a pet, you’re better off exploring other more suitable species as pets.

The area Blue Racers typically inhabit have been overwrought with human development over the past century. Thus, the species is experiencing a decline in population and has been for decades.

According to the Committee on the Status of Endandered Wildlife in Canada, or COSEWIC, Blue Racer Snakes are listed as Endangered in the Country of Canada.

With that in mind, they are not listed on the “Red List” by the IUCN. So, while Canada considers this species to be endangered, it has not yet been internationally recognized as a species of concern.

That said, the population of this species seems to still be in jeopardy due to increased human development in their native environments.