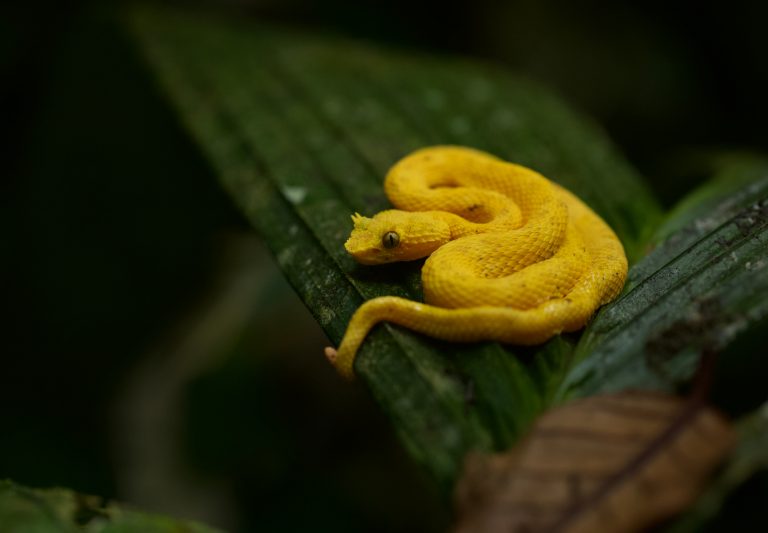 When it comes to exotic serpents, the Eyelash Viper takes the cake for being one of the most unique looking snakes on Planet Earth.

It is down right mesmerizing. Don’t let it’s looks fool you, though.

This little snake can deliver a powerful and deadly strike. Eyelash vipers have extremely potent venom, and they are not to be reckoned with.

In this profile, you’ll learn everything you need to know about this exotic species.

From where they live to how dangerous they are; this post contains a well-rounded overview if the Bothriechis Schlegelii.

Plus, you’ll see some really amazing photos down below!

The eyelash pit viper (Bothriechis Schlegelii), gets its name from the growth of scales over its eyes which resemble eyelashes.

It also goes by several other names including the Schlegel viper, eyelash palm-pit viper, and the horned palm viper.

The Eyelash Viper is one of the smallest vipers, rarely extending beyond 30 inches in length, and it delivers a potent venom that can be lethal for humans, and most mammals.

This particular viper is native to the Central and Northern parts of South America. The eyelash viper resides on trees (esp palm), vines, and branches.

On the ground, its found in dens, crevices, ravines, and caves where it feels safe, and regularly hides in the tall grass waiting to ambush its prey.

Where are Eyelash Snakes Found?

The eyelash pit viper is chiefly found in Central and Northern parts of South America.

Its range extends from Southern Mexico all the way down south to Venezuela, Colombia, Ecuador, Costa Rica, Panama, and Peru.

It prefers the humid tropical climate with dense foliage and lives in the mesic forests at altitudes of 8,000 feet and mostly resides close to permanent water sources.

It prefers the humid tropical climate with dense foliage and lives in the mesic forests at altitudes of 8,000 feet and mostly resides close to permanent water sources.

The inadvertent transport of banana shipments from South and Central America have caused sightings of the viper in many parts of the world.

If you work in the grocery business, let me tell you: this is the LAST thing you’ll want to find in your shipment of bananas.

Especially because the yellow and green color acts as great camouflage amongst the popular fruits.

The snake has a wide habitat ranging from the sea level forests, dense woods, and knee-high vegetation in the foothills and lowlands of the mountain forests in South America.

The snake prefers to inhabit vines, low branches, and shrubs, where it can seek prey and also hide from other predators.

Essentially, this snake loves to climb. It will often be found above the ground floor of forests.

The eyelash viper is mostly active at night and can be seen on trees, vines, and branches, where it waits to ambush prey.

During the day, like most pit vipers, the snake prefers to remain hidden in crevices, dens, ravines, and caves where they feel safe.

The eyelash viper comes in many colors ranging from pink, brown, gray (most common), spotted black, and even yellow (the rarest color).

The snake has keeled scales that feel sharp when touched or brushed, which protects the reptile while gliding through vines and branches.

It is instantly recognized because of the triangular shape of the head, and its distinguishing eyelashes that often appears like a hood over its eyes.

The exact function of eyelashes in the eyelash viper is not known.

Experts believe the eyelashes play a role in camouflage and hides the snake’s outline in the greenery and also they protect the eyes.

On either side of the head are the heat-sensitive pits, which are vital for detecting prey. The snake’s pupils are long and have vertical slits.

A mature Eyelash Viper grows to an average of about 2 feet in length. They grow to anywhere from 20-30 inches long and females tend to be few inches longer.

The mature snake usually weighs less than 2 pounds. The low weight permits it to glide with ease through the vines and branches.

How Long Do Eyelash Viper Live?

The Eyelash Viper lifespan is not more than 5-7 years. This mainly because of its many enemies including foxes, other larger snakes, birds, otters, badgers, hedgehogs, and humans.

However, in captivity, it can live at least 12-17 years as long as it is provided with good care and the right housing. But, owning one in captivity may not be the best idea…

After all, this is an incredibly dangerous creature.

What is the Behavior of the Eyelash Viper?

The Eyelash viper prefers to be on the ground when resting.

It is mostly active at night searching for food and mostly uses trees to travel or bask.

The snake in general is not aggressive and prefers to retreat rather than fight. However, if the viper has no chance of escape, it will strike.

The majority of Eyelash Viper bites to humans occur when unknowingly stepped on or people threaten it.

Do the Eyelash Viper Bite?

They are not aggressive and human bites are not common. Though, if a human gets too close or threatens the snake, the eyelash viper will strike.

The bite is quite painful and results in immediate swelling followed by blister formation, hemorrhage, and ulcer development within a matter of hours.

The Eyelash viper bite will lead to loss of fingers, extremity, or even loss of life if the victim doesn’t seek treatment.

So, what should you do if you are bitten by an Eyelash Viper?

How Venomous Are Eyelash Vipers?

Despite its small size, the eyelash viper carries a venom that is both hemotoxic and neurotoxic.

This Venom can damage the red blood cells as well as attack the nervous system.

After the Eyelash viper bites a mammal, the mammal develops complete cardiovascular collapse and paralysis that lead to death pretty fast.

Due to its small-sized body, the eyelash viper feeds on small mammals including rodents, amphibians, birds, lizards, and even other small snakes.

Eyelash Viper also feeds on birds during the migration of birds to Central and South America, and this time of the year that its most active the day.

The viper returns twice a year and lies in wait in the tall grass. When the migrating birds unwittingly hover over the grass, they often get caught by the snake.

The eyelash viper like most snakes does wait patiently in one spot for their prey to wander nearby and then ambushes them.

It wiggles its tail to simulate worm-like motions to attract its prey.

Then strikes very fast in many cases, and the prey is unable to getaway.

Like all pit vipers, it is solenoglyphous – meaning it has an advanced method of delivering venom.

Using two sharp needle-like fangs located in the upper jaw that connects to the venom glands.

Solenoglyphous reptiles are able to open their mouths wide and this swings forward their fangs. This allows maximal penetration into the prey and at the same time injecting venom.

However, the venom not the most potent compared to other snakes, this technique of injecting the venom allows for deeper injection.

It takes few minutes for the venom to incapacitate the prey, and after its death, the prey is swallowed whole.

The young viper is often not very successful at killing the prey but with time it does improve in both its accuracy and success rates.

Reproduction and Mating of the Eyelash Viper

The eyelash viper starts to reproduce around 2 years of age. Besides, the weather has to be warm; Mating in mostly takes place in early spring.

It is polygamous, and one male does mate with several females.

However, each female will only mate with one male. The courtship and mating is a nocturnal activity.

Two males intimidate each other with their head and upper body to seek the female attention in a dance.

This ‘adder dance’ can take 1-3 hours until one tires. Usually, there is no biting involved during this dance.

The male who has won the content will mate with the female. The female will carry the eggs inside her body (Ovoviviparous).

The eggs will hatch inside the female stomach after 6 months. At the later stage of pregnancy, the female will stop eating and remain in one place.

The offspring size varies from 6-8 inches long, and they have all the other physical features of an adult viper.

The female will usually give birth to 4-20 offspring. The newborn snakes ready for life outside the body.

Since the eyelash vipers do not make good parents, the younglings are fully prepared for life immediately after birth.

Despite the fact that it’s poisonous, some people do keep it as a pet. Wildlife trade in this species is not uncommon and the snake is common at many zoos.

People keep eyelash vipers in captivity due to their fascinating color and pattern.

The eyelash viper is a low maintenance snake and does not need rigid environmental conditions to thrive.

The snake maintenance is easy and will easily feed on both live and dead mice. It requires a large tank with a heavy lid to prevent its escape.

So, does that make you want to own one?

You better think twice. Owning a dangerous pit viper or rattlesnake as a pet can have serious repercussions.

Also, it’s not legal in many US states and other countries.

There are many reasons as to why you should consider owning a different species of pet snake over this one:

Well, if you do want to own one, it’s entirely possible to buy an eyelash viper on the internet.

How Much does One Cost?

Eyelash vipers will likely range in the $500-$1000 range. IF you’re wondering where to buy one, check out the link above.

You can also probably find them for sale at exotic pet expos.

How to Keep One

In general, we do not condone owning dangerous reptiles as pets.

That said, if you do want to own one, here are general guidelines to do so.

Keep in mind, you should consult with experts and seek outside advise for owning this pet. Do not take this as advice and endorsements to own a viper or any other venomous reptile.

In any case, make sure you:

Conservation and Threats of the Eyelash Viper

The conservation of the eyelash viper remains stable and the species is no longer threatened, however, their numbers have declined.

The reasons are urbanization, loss of snake habitat, expanding agriculture, and road traffic.