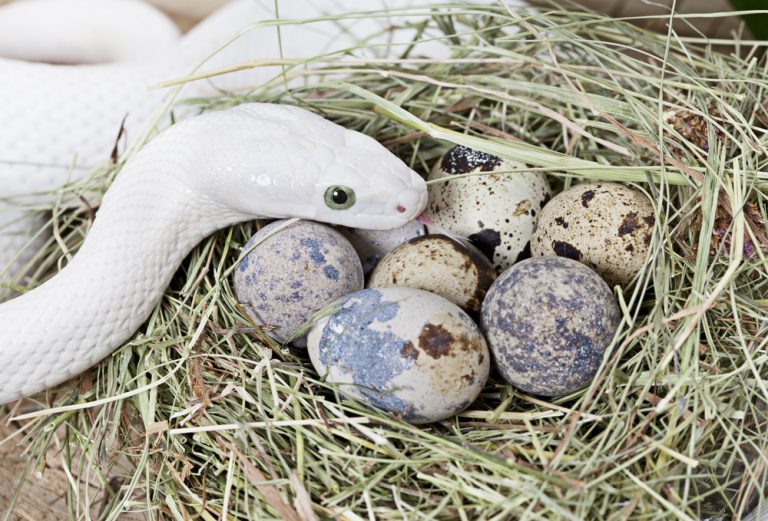 There are approximately 3600 different species of snakes and 70% of these are oviparous, meaning they lay eggs. There are some snakes that may only lay as little as 1 egg or give birth only once every three years. However, there are others that can lay up to 100 eggs at a time and who reproduce once a year.

That is a whole lot of snake eggs. And despite the unbelievable range of diverse characteristics recognizable in different species, the same cannot be said for their eggs.

Learning how to identify snake eggs has many benefits.

For snake enthusiasts, it is a great opportunity to add to your knowledge and feed curiosity. You can look out for eggs and practice identification.

And if you’re not a snake enthusiast, but you live in an area with venomous snakes, then learning to identify the eggs is extremely beneficial.

It will be useful for preventing unwelcome house guests or intruders on your property.

Check out everything you need to know about snake eggs including some really interesting facts, as well as how to identify them.

Do Snakes Give Live Birth?

The gestation period of a snake can be anywhere between as little as two months to as long as human pregnancy at 9 months. This is dependent on the type of species.

After the gestation period, there are two ways that a snake gives birth. Most people are quick to think that all snakes lay eggs, as this is a common characteristic of reptiles. However, there are snakes that give birth to live young, such as cottonmouths in North America.

There are three main categories of embryonic development in snakes:

The answer, then, is that around 30% of snake species give live birth. It is quite a startling image to think of a tiny vessel of venom entering the world on the hunt.

If you’re wondering whether you’ve picked up a snake’s egg or a bird’s egg, there are a few things you can look out for to aid identification.

Some important aspects to take into consideration are the shape, hardness, and appearance. If you happen to come across snake eggs, you’ll usually find them underground in loose soil or sand.

The female lays them underground, as this acts as a natural incubator. In most cases, she’ll then abandon the eggs. So you don’t need to worry about a protective mama attacking you when she finds you poking around her eggs.

Many snake eggs look strikingly similar to a bird egg and the vast majority of eggs from different species look almost exactly the same.

Identifying a snake egg is really a two-part process:

First, figuring out that the egg does indeed belong to a slithering friend and not some other cold-blooded animal or bird.

Second, attempting to identify the species from slight indicators on the egg. However, this is an almost impossible feat unless you happen to be a snake expert or the egg is very rare, with defining physical characteristics.

The easiest way to differentiate between a snake egg and bird egg is to note the texture and hardiness of the shell.

Bird eggs are hard, as we know. On the other hand, snake eggs are slightly soft with some give, and the texture is leathery.

This leathery, soft shell of a snake egg decreases the risk of survival significantly.

This means that you need to be gentle and brief when handling the egg for identification purposes.

Reptile eggs can withstand handling for a short time but shouldn’t be held for more than a couple of minutes.

Most snake eggs are oblong.

There are exceptions to this, such as with some African and Asian snakes that lay bumpy eggs that resemble a ginger root.

In North and South America, snake eggs look strikingly similar in shape to the eggs of birds.

It’s safe to say that the color of the eggs will be white, off-white, or beige in color.

If you’ve happened upon a bright blue or green egg, it’s either not a snake egg or it’s a snake egg that is dying. This is caused by mold or an unhealthy embryo, but there’s no hope for the little snake if the egg is blue/green.

How Big are Snake Eggs?

Snake egg size differs according to the type of snake.

It also changes throughout the incubation period as the egg grows alongside the embryo. As the egg draws in water, it increases in size and continues to grow until the snake hatches.

The size of a snake egg can be anywhere from 1 inch to the massive 4 to 5-inch python eggs.

In terms of identification, most eggs that have a rubbery shell and are over an inch big are usually snake eggs. Other reptiles such as lizards tend to lay smaller eggs.

How to Identify a Snake Egg

As mentioned above, you can identify whether it is a reptile egg by noticing the texture and suppleness of the shell.

Once you’ve looked at the shape, color, and texture, the final step in identifying the egg is to examine it under a bright light. This is best when the room is very dark.

If you lift the egg up towards the light bulb, you’ll be able to see a silhouette of the embryo inside. Look out for a round-shaped embryo as this indicates that it is a snake. However, to the untrained eye, this could come across as any reptile embryo.

This method of holding the egg up to a light is called candling and can be an effective identification technique if you know what you’re looking for.

Identifying Species of Snake from the Egg

It is extremely difficult for the average person to identify a snake egg according to species.

The majority of eggs look almost exactly the same and when there are identifiable variations or features, they are often so minute.

Snake experts or enthusiasts can differentiate between a snake egg and a reptile egg through the candling process. The illuminated contents of the egg may give clues to someone with extensive knowledge.

Identifying the species of snake from an egg can sometimes be impossible, even for the experts. Sometimes, the only thing to do is to wait until it hatches.

Can You Eat Snake Eggs?

It’s slimy, gooey, doesn’t smell too great and it contains the stuff of many people’s nightmares.

Sounds delicious, right? In fact, many countries in the world eat snakes and their eggs.

In parts of Asia, such as Vietnam, China, Japan, and Taiwan, snakes have been a part of the cuisine for hundreds, and even thousands, of years.

Snake meat is considered a delicacy and many believe that it has healing properties for a number of ailments.

A well-known, and pricey, delicacy in China is snake soup. It is believed that snakes are very nutritious and may help anything from impotence to headaches.

As to the question of whether humans can eat snake eggs, the simple answer is yes.

Although, whether they are a tasty meal, is debatable and it’s unlikely you’re going to be seeing them on your standard breakfast menu.

If you find an egg in your garden and cannot resist the urge to take a bite out of it, cook it first.

Have a look at these snake egg pictures. See how similar they look to bird eggs at first glance? Try to find some identifiable physical features!

Some species are very protective of their eggs and nest.

In general, it’s best not to tamper with snake eggs, especially if the snake is venomous. Chances are it is near the nest, and you could risk being bitten.

Eggs of snakes take on a long, oblong shape.

They are usually off-white like most other eggs, and almost look like large tic tacs. in some cases.

Another example of a snake protecting it’s eggs.

This python mother looks as if she will fiercely protect her unhatched young.

Here’s what a hatching snake egg looks like. The eggs are very soft, so its easy for the babies to get out when hatching.

Unfortunately, the softness means these eggs are also extremely delicate and are more vulnerable.

How Much Do You Know About Snake Eggs?

Do you know your reptile from your fowl? A rattlesnake egg from your everyday chicken egg?

Hopefully, this guide has made you a little more confident about identifying a snake egg that you might get lucky and come across.

Remember, the key features are a soft, rubbery shell and texture, and an oblong shape.

If it’s green or blue and soft, then you’ve probably happened upon a ‘rotten egg’. You wouldn’t want to fry one of those up for a snack.

You can handle snake eggs for identifying purposes and if you want to move them off your property. But be gentle and don’t be handsy for too long as they’re pretty fragile and even slight movements can hurt the embryo.

Next time you’re out for a walk, keep your eyes peeled for a clutch of eggs on the ground and test out your new knowledge!