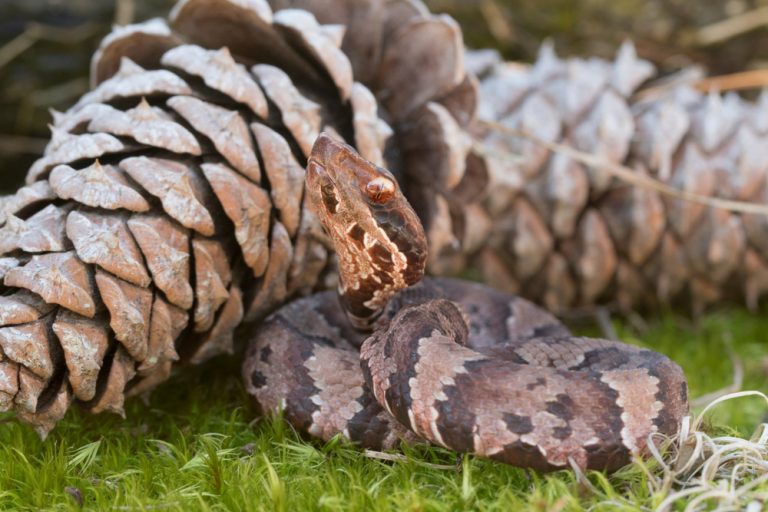 Think you saw a baby cottonmouth?

You came to the right place.

Cottonmouth snakes are the only venomous water snake in North America and are part of the pit viper family that includes rattlesnakes, mamushi vipers, and more.

Baby cottonmouths are as dangerous as their parents and learning how to identify them is an essential skill. Especially for people who live in regions where the cottonmouth is prevalent.

These snakes are often mistaken as being aggressive because of their notorious defensive position which comes off as extremely menacing. But in fact, they’re quite docile and will often flee when confronted by an unaware human.

Despite this, learning how to identify these snakes can save the human from a trip to the hospital and allow the snake to slither off peacefully.

Luckily, baby cottonmouths have some pretty striking features which separate them from the adults and other snakes. Learn everything you need to know about cottonmouths here.

The Basics of a Baby Cottonmouth

Where Will You See Baby Cottonmouths?

As these pit vipers are semi-aquatic, they are found in wet areas and bodies of water such as rivers, streams, swamps, marshes, and ponds.

It is not unheard of to find a cottonmouth far from water but it is certainly not common.

Their habitat spans the southeastern United States, from southern Virginia to Florida and Eastern Texas. According to official sources, there are three subspecies of the Agkistrodon piscivorus:

What do Baby Cottonmouths Eat?

Baby cottonmouths are carnivores and have a diet strictly consisting of meat. However, these snakes like a little bit of variety.

A lot of their food comes from the waters they inhabit and they will make a meal out of frogs, fish, lizards, and even turtles.

They wiggle their tails to imitate a worm and when an unsuspecting frog comes in for a bite, the cottonmouth will strike.

This method of imitation is called ‘caudal luring’ and is central to a juvenile cottonmouth’s survival.

Where Did the Snake Get its Name?

Its scientific name is derived from the Greek words for ‘hooked’ (ancistro) and tooth (odon) and the Latin words for fish (piscis) and eat (voro). Thus resulting in the rather charming translation of ‘hooked-tooth fish-eater’.

This is because of the identifiable white color on the inside of its mouth.

When a cottonmouth feels threatened it will try to scare off the attacker by flashing its bright, white mouth.

As for ‘water moccasin’, the snake is so dubbed due to its incredible swimming ability and its dark coloring which is supposedly reminiscent of a soft leather shoe.

When is “Cottonmouth Season?”

They might be small but the baby cottonmouth snake can be very dangerous. It’s good to know when to expect a heightened number of snakes around your area.

Cottonmouth’s mate in spring and during this time the males move around waving their tails in an attempt to attract the attention of a female and steal her from other suitors.

Females give birth to around 10 – 20 babies every 2 to 3 years. The gestation period is between 3 to 4 months, so baby cottonmouths will be out and about in full force in late summer.

Cottonmouths are ovoviviparous, which means they give birth to live young. The newborns are around 10 inches long and immediately go off on their own.

Look out for them during August and September.

The cottonmouth is commonly mistaken for many non-venomous northern water snakes. This is because both snakes can be spotted in water and have similar coloring and patterns at a quick glance.

Look out for these distinguishing cottonmouth features:

Mistaken identity is especially common in juvenile snakes as their coloring and patterns are different while they are young.

The baby cottonmouth pattern is strong and distinctive with around 10 to 15 reddish-brown bands across their back.

Another distinguishing feature of young water moccasins is their bright yellow tail tip. This brighter color is a handy feature used by newborns to attract prey.

As the snakes mature, the tail becomes greener in color and eventually black in adulthood.

Here, you’ll easily see the difference between the baby and adult cottonmouths.

Most noticeably, the bold yellow tail tip and brighter patterns of the baby compared to the very dark tail and body color of the adult.

The little 10-inch baby cottonmouth is quite a cute snake, but don’t let that fool you. These tiny snakes don’t need a lot of size to inflict some serious damage.

A baby practicing his defense mechanisms.

Wouldn’t want to get to close to this bugger.

Another baby cottonmouth basking in some leaves near a pond.

Just look how small they can get. That pinecone is a key tell as to how tiny this sucker is.

Also, check out the demon-like eyes. That’s an easy way to tell that this is a dangerous snake.

They can be very mean looking!

An adult/juvenile cottonmouth displaying their warning sign in which gives them their common name.

Here are some more photos of cottonmouths to help you understand what they look like:

What Snakes are Most Commonly Mistaken for Cottonmouths?

The habitat of cottonmouths overlaps with many non-venomous water snakes which are often killed due to misidentification.

Killing any snake, venomous or otherwise, should be avoided unless absolutely necessary.

Snakes are extremely important to the ecosystem as they play a vital role in population control. Damaging the native snake population can have detrimental effects on the ecology of an area.

This is why it is so important to be able to identify snakes effectively and avoid the needless killing of harmless species. Common water snakes are the most frequent misidentification as they are found in the water and have similar coloring.

If you spot a snake in the water, one thing to take note of is how much of the body is visible.

Common water snakes are not very buoyant and so only their head will be visible above water. On the other hand, you’d be able to see a cottonmouth’s body in the water.

These are some similarities between cottonmouths and common water snakes which might cause misidentification:

If you can avoid getting too close to a snake that you think might be a cottonmouth, it is advised you do so.

However, there are some key features to look for to distinguish between the water moccasin and a northern water snake species.

Things to look for in a common water snake:

Unfortunately, some species of snakes can look quite similar to a cottonmouth. There are many cottonmouth lookalikes that get mistakenly killed all the time.

Below you’ll find various lookalikes to help you distinguish the difference between harmless species and the dangerous cottonmouth viper.

This snake spends a lot of its time near water and has a dull brown coloring which is similar to a mature cottonmouth.

However, Graham’s crayfish snakes have a light yellow or tan stripe along their side. This is the distinguishing feature to look out for.

When viewed from the top, this snake resembles the cottonmouth due to its dark colors.  The startling distinguishing feature is the bright red ventral scales that the western mud snake has, and that the cottonmouth definitely doesn’t.

This can be a tricky one to see when the snake is on the move.

Eastern hognose snakes prefer a drier habitat to the cottonmouth and this fact alone should help you distinguish between the two snakes based on location.

But the presence of faint bands and dark body-color of the hognose can lead to some confusion when trying to tell the difference between the two.

The defense position of this snake, flattening their heads and striking closed-mouthed, is sometimes mistaken for the aggressive defense behavior of the cottonmouth.

One thing to remember is that the cottonmouth theatrically displays the white interior of its mouth by opening up wide.

If you’re wondering whether a newborn, 10-inch cottonmouth is really something to watch out for, the answer is yes.

Commonly, juvenile snakes produce less venom than adults. However, the cottonmouth develops venom at a young age, and even at just 10 inches long, they can be extremely dangerous.

This blood loss can happen internally as well as externally and it is imperative that bite victims seek medical attention immediately.

Typically, a bite from one of these fellas is not fatal. That said, it’s advisable to seek medical attention asap if venom is injected.

In some cases, the cottonmouth will ‘dry bite’ which is essentially a bite without releasing any venom.

This is done in order to conserve the venom for prey, which it knows you are not.

Cottonmouths are not typically aggressive and are unlikely to attack unprovoked. If you come across one of these snakes, look out for warning signals that indicate it is preparing to bite.

When threatened, they will open their mouths very wide, exposing the white interior from which the name ‘cottonmouth’ derives. The second warning sign is the rustling of their tails.

Of course, the best way to avoid a cottonmouth bite is to steer clear of the snake when you come across one.

Although they look ferocious and get a bad rap as aggressive snakes, they are actually quite placid and will usually flee if confronted.

How to Handle a Baby Cottonmouth Bite

If you get bitten by a cottonmouth, the most important thing is to remain calm and move away from the snake so as not to get bitten a second time.

Do your best not to panic as an increased heart rate will cause the venom to spread quickly throughout your body.

Seek medical attention immediately, even if you assume that it was a dry bite. An anti-venom called CroFab is a very effective treatment if administered soon after the bite.

How to Remove Baby Cottonmouth Snakes

If you come across a cottonmouth in your home or on your property, the best thing to do is call snake removal experts.

If you’re not sure whether it is a cottonmouth or not, and can’t accurately identify it, rather be safe and….call an expert. These snakes are extremely venomous and a bite can be fatal or result in the loss of a limb, even with quick treatment.

That being said, cottonmouths love water, and it is unlikely that one will wander into your home if you live far from water.

If you have small bodies of water on your property at a safe distance from your house, the best thing to do is leave the snake alone and it should move off on its own.

How to Keep Baby Cottonmouths Out of Your House

Rather than having to deal with unwelcome guests, take some measures to prevent venomous intruders.

Have You Learned How to Identify a Baby Cottonmouth?

Hopefully, you’re feeling confident about identifying a baby cottonmouth and recognizing the differences with other snakes.

Remember to call an expert and refrain from handling or removing any of these snakes yourself. And if you can avoid killing any snake, this should always be the first choice.