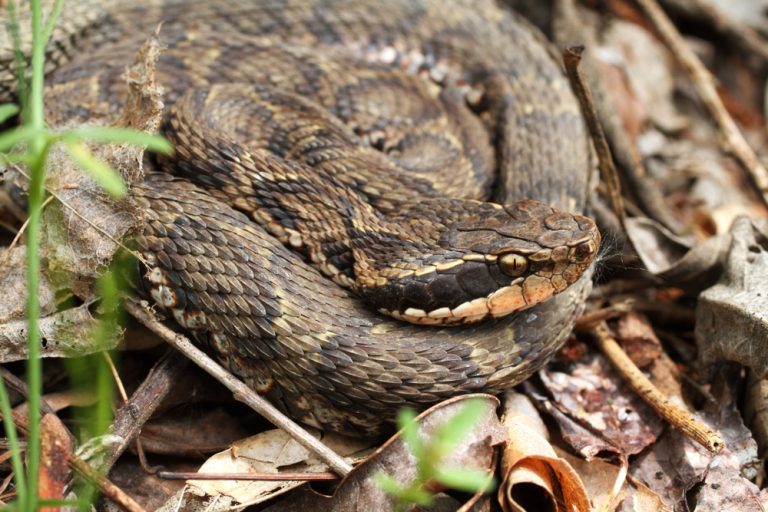 This deadly snake is a venomous pit viper found in Asia.

The scientific name of the Japanese pit viper is in honor of Jan Cock Blomhoff, who was a resident in Japan from 1817-1824 while directing a trade colony.

There are four subspecies of this pit viper, of which the mamushi pit viper is one of the most dangerous animals in Japan.

The mamushi is a medium-sized viper and accounts for nearly 3,000 bites in Japan each year; of these, at least ten people die annually. Experts consider the snake to be the most venomous in Japan. So, if you happen to chance upon one of these snakes, it’s best to steer clear.

The mamushi pit viper is only found in Japan, Korea, and China.

Besides the mainland, the mamushi pit viper is found on the islands of Honshu, Hokkaido, Shikoku, and Kyushu.

Also, for some reason, this snake has been reportedly found in parts of Russia. This is likely due to happenstance.

It’s not native to Russia, so the population, if any, is probably a result of them being released in the wild and ending up there because of trade.

The mamushi is not difficult to find.

So, if you’re herping & wanting to find this humble viper, it’s best to look around areas near rivers, streams, swamps, ponds, etc.

It is also a frequent visitor to the farms and paddy fields, which also attract birds and rodents. Often the mamushi pit viper basks on the grass early in the morning.

When not active it prefers to hide under logs, a pile of leaves, rocks, crevices, and small creeks. So, if you’r really keep on finding one, you’ll likely have to flip over some obstructions.

Be careful, though. These snakes are quick to strike. If you are turning over stones to find this species, it’s best to keep yourself at a distance.

The mamushi pit viper does not like open land.

Instead, it prefers to remain low in swamps, meadows, marshes, and rocky hills. The snake is located in the woodlands and mountain rock outcroppings.

The mamushi like most vipers is a nocturnal creature, especially during the summer. Hence most people often get bitten at night and early morning, chiefly because they are unable to see or hear the snake

It is chiefly terrestrial, but is also a good swimmer and an agile climber of trees. The snake usually lies in wait for unsuspecting prey to pass by and then bites them.

The color of the mamushi viper varies and depends on where it is located. The color may vary from reddish-brown, gray, or yellowish-brown.

The surface also has many irregular blotches that have a black border and a lighter colored center. The head of the snake is large, oval is usually on the darker side and either side of the face are dark stripes.

The dorsal surface is heavily keeled, this feature allows the reptile to move through the grass and woodland with ease. The tail is short and tapered.

The eyes are round and large. The two fangs on the upper jaw are needle-like and connect to the venomous gland in the jaw.

How Long Do They Live?

On average, Japanese Pit Vipers will live around 10-15 years in the wild. That said, they can live to be much older, but their lifespan is typically stinted by their hostile environment. These vipers could live up to 20-25 years in captivity.

How Venomous Are Mamushi Pit Vipers?

The venom of the mamushi pit viper has been extensively studied.

Irrespective of which country the viper is located, the potency of the venom is the same.

The venom of the mamushi is very potent and consists mainly of a toxin that breakdowns red blood cells.

There are also two neurotoxins in small amounts, which paralyze the prey.

In conclusion, this viper has a highly potent venom and it should not be reckoned with.

Most people get bitten by the mamushi viper at night when the snake is most active.

The viper frequents and hides in the rice paddies, resulting in many encounters with humans.

Most humans get bitten in the rice fields or while walking through muddy fields or damp grass- a habitat that is preferred by the mamushi viper. In the rice paddies, the majority of bites are on the extremities.

If bitten by this deadly Japanese viper, one should immediately seek treatment.

When a bite occurs, most people require treatment in the hospital for 5-10 days.

Because the toxin can affect breathing, damage the kidneys, and cause significant internal bleeding some individuals may require admission to the intensive care unit.

There is an antivenom available in Korea, Japan, and China, which can quickly neutralize the toxins. In Japan each year nearly 3,000 people suffer the snake’s bite, and at least 10 die.

The mamushi pit viper leads a solitary life, only coming together during mating.

It is a lethargic snake and prefers to be left alone.

Unfortunately, if humans chance upon one of these snakes, they will defend their solitude and can be quite aggressive.

The reptile is very short-tempered and gets easily irritated. Even at the slightest confrontation, it does not hesitate to strike.

The mamushi viper is not afraid of intruders. It does not back down and it is best to avoid the snake.

The Japanese pit viper is a carnivore.

Like many other vipers, it ambushes its prey. It will usually lie in the grass or logs with its head just looking above ground level.

It generally uses camouflage to hide in the vegetation or leaf piles. Its diet chiefly consists of rodents, lizards, small birds, insects, and amphibians.

The snake frequents the agricultural and farming land, where birds and rodents also flock.

Unlike other vipers, the mamushi pit viper does not pursue its prey but lays hidden and ambushes any intruder.

The viper bites the prey when on striking distance, and most of the prey die within minutes. The viper swallows whole the prey after its death.

Males and females become sexually mature between ages 3-4 years. The reptile is a viviparous snake, meaning that it gives birth to live young.

The male often has to fend off other males to copulate with the female.

Mating usually takes place in late spring and the female will carry the eggs in her body for 2-3 months.

At the end of the summer, the female will give birth to live newborns.

A litter of 4-12 younglings is the norm. Like most other vipers, the female mamushi is not a good mother and the younglings survive on their own.

However, right after birth, young mamushi pit vipers are fully equipped for an independent life.

The newborns will survive on any remnants from birth and then consume insects and other tiny animals.

The mamushi does not make a good pet snake.

That kind of goes without saying. After all, we are talking about one of the most dangerous creatures in an entire country.

Plus, this snake would be no easy undertaking to keep as a pet.

First, its habitat is hard to replicate. It can also be a fussy eater and the wildness in the snake never disappears.

Lastly, did we mention this reptile is very venomous?

The only place that is acceptable to keep this snake is at a zoo or serpentarium. It’s generally best to avoid contact with this species all together.

Like many other snakes, the mamushi pit viper helps keep the rodent population down. This can actually be very helpful for farmers, as rodents are known to be an invasive species and will destroy crops.

The exact number of mamushi pit vipers in existence is not known, the snake is under no threat.

But the numbers have been declining rapidly over the past 3 decades because of urbanization and human killings.

In Korea and China, people eat the snake. It’s considered a delicacy. However, the majority of deaths result because of unreasonable fear by humans, and not knowing what to do when encountering this deadly snake.