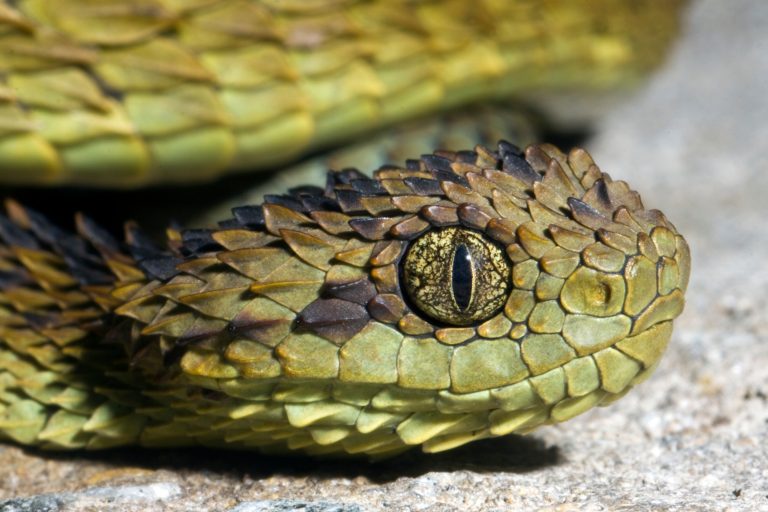 Or Hairy Bush Viper, depending on who you’re talking to.

It has several different names, and is quite the incredible looking snake. In fact, it’s one of my all time favorite snakes.

Mostly because it’s so unique looking. It’s actually one of the most unique snakes in the world, given it’s ‘hairy’ look.

It is a small to medium-sized viper with a rough-looking appearance caused by its keeled dorsal scales. It goes by several other names including the spiny bush viper, the rough scaled viper, and hairy bush viper.

During the early morning, it may be seen hanging off the tree limbs basking in the sun. For the most part, the African bush viper is a solitary animal.

But, don’t be fooled by it’s cuteness and smallness. African Bush Vipers are incredibly venomous, and could pack a life-ending blow if bitten.

From location, diet, to 8 stunning photos of the Hairy bush viper, we’ve covered it all.

What is the Habitat of the Spiny Bush Viper?

The snake thrives in the dense humid and wet forested areas in these countries.

Depending on the season the snake may be found at varying altitudes.

During the dry season, the Spiny Bush viper prefers the lowlands but during the rainy season (May to August), it prefers the high grounds.

The African Bush viper is a nocturnal reptile.

During the day time, it usually hides in ravines or the deep grass. However, early in the morning, it basks along the tree branches.

The snake is a versatile tree climber and it often hangs from the tree branches and vines, waiting for prey to pass by.

Besides being an agile climber, the African bush viper is also able to maneuver itself with stealth on the ground.

The Hairy bush viper is a well-built snake with a firm muscular body and an outer surface with strongly keeled scales. Also, it’s one of the most unique looking snakes on planet earth.

The head is covered with small keeled scales. This is a distinct feature of this viper. Their color varies from green to yellowish, which enables the snake to hide in the surrounding vegetation.

Very few snakes have keeled scales like this species. That, coupled with the riveting colors of this snake make it a true specimen.

So, how big do Spiny Bush Vipers get?

The reptile will grow to a length of about 24-36 inches with the females slightly longer by a few inches compared to the males. This is typical with most species — the females being larger, that is.

The head is triangular and its eyes are large and oval, which makes it easier for the snake to see in the thick dense forest. The spade-shaped head is commonly found in venomous snakes, particularly vipers.

It’s a dead giveaway when identifying a venomous snake, though some nonvenomous snakes have triangular shaped heads too.

The face reveals a prominent short snout in most males. Unlike other vipers, the eyes are oval, large, and surrounded by at least a dozen circumorbital scales.

Even the spacing between the eyes is separated by 6-9 scales. The nose is a tiny slit and again separated by a row of scales from the eyes.

Like many snakes, it is heterothermic meaning it can switch between homeothermic and poikilothermic status depending on the climate and its metabolic activity.

Unlike other vipers, the Spiny bush viper does not have heat-sensing pits but instead relies on vision, olfactory, and vibratory senses to detect prey. They actually have quite good vision.

How Long Do They Live?

The documentation of the African bush viper lifespan is poor. Reports indicate that most vipers will live in between 10-12 years but because of predation and disease, most have a shorter life span.

Afterall, there’s no shortage of predators in the places they like to call home.

Besides humans, other predators of the viper include other snakes, birds, and larger fish.

In captivity, the reptile is known to live 15-20 years because there is no risk of predation.

The fully grown adult bush viper will grow to a length of about 24-36 inches. The females tend to be slimmer and a few inches longer.

How Venomous Are African Bush Vipers?

Despite its relatively small size, the African bush viper carries a punch with its bite.

While extensive studies on its venom have not been done, some studies indicate that the venom is primarily neurotoxic- meaning it damages the nerves.

Besides, the venom also causes extensive internal bleeding, resulting in rapid death. That’s a pretty terrible way to go, whether your this snakes dinner or a human.

Unfortunately, these snakes are common among the exotic, and sometimes black market pet trade. This is mostly due to their unique looks.

If you’re considering buying one of these as a pet, be warned. They can kill you. There are plenty of other pet snakes to consider if you want to own one.

The bite and venom of the African bush viper has not been well studied. But it is reported that its venom is primarily neurotoxic- meaning it can paralyze the nerves.

The potency of the venom does vary a great deal dependent on where the species is located, its size, weather, and altitude.

Basically, getting bitten by an African Bush Viper is going to be a really bad time.

It will be super painful, and potentially life threatening.

The snake is usually not aggressive, but will stand its ground when threatened.

So, if you see one in the wild or in captivity, don’t get too close.

The African bush viper is a deadly snake for humans.

The exact number of African bush viper bites to humans is not known, but the numbers are not minuscule.

Most bites occur when people unsuspectingly walk into forested areas where the snake resides or stamp on the reptile.

Without treatment, a bite from the African bush viper is usually fatal.

Because of its lethality, there is an antivenom available in some African hospitals.

The African bush viper like most other vipers is a nocturnal creature. And like its other related species, it ambushes its prey. In order to catch the prey, it will lay in wait for a long period of time.

Once it sees the prey within range, it makes a very quick strike and within a minute the prey is dead.

For the most part, the African bush viper is a solitary animal except during mating.

To get around and see prey, the reptile uses its vision but it also has highly developed olfactory and tactile senses.

If cornered or threatened, it will assume a strike position with the upper part of its body extended above ground.

It will make a threatening posture towards larger predators and is not shy about striking. When competing for a female, the male will try and make himself larger by lifting the body upright.

The African bush viper has a wide habitat ranging from the sea level forests, dense woods, and knee-high vegetation in the foothills and lowlands of the mountain forests.

The snake prefers to inhabit vines, low branches, and shrubs, where it can seek prey and also hide from other predators.

To avoid predation, the African bush viper uses camouflage to blend in with the environment. This allows it not only to hide but also to surprise its potential prey.

The young African bush vipers have a different skin color compared to adults. This serves as a warning sign to other threatening animals.

While it usually hunts for prey while in trees, it will also actively seek prey while on the ground. In fact, the African bush viper will also prey upon its own kind.

The snake swallows the dead prey after it injects the victim with venom. The venom paralyzes and kills quickly, but it’s definitely not a pleasant death for the unfortunate victims.

To attract prey the snake will sometimes use its colored scales on the tail to lure in unknowing critters.

However, as the snake matures, the coloration of the scales becomes more uniform, and luring prey via this method does not work.

n most cases, the adult snake ambushes its prey with a high success rate.

Most preys are not able to get away from the African viper strike, which is lightning fast.

Yet another reason to be wary when near these deadly vipers. The strike can happen in a blink of an eye, and they can strike about the distance of their entire body.

The complete mating cycle of the reptile is not known but one feature is known, these vipers are seasonally monogamous.

Females do not mate until they are nearly 3-4 years old but males start to mate after 24 months.

The courtship is a nocturnal activity. During the mating process, the male will communicate with various body gestures which may even include biting and rubbing.

The female will only reproduce once a year, usually during the wet season (May to August). The female African bush viper will carry the unborn young inside her abdomen.

The gestation period is about 2 months after which she will give birth to 2-12 live younglings. The newborns measure 4-6 inches in length and have all the features of the adult viper except the size.

However, after delivery, the female viper abandons the offspring immediately.

Since the neonate vipers are venomous, even at birth they are able to survive independently but few make it to maturity.

The growth of the baby bush viper is initially fast but as the snake approaches 24 months, the growth slows down.

It is not usually kept as a pet. This because of its venomous and unpredictable.

However, you can sometimes find a few of the snakes in various zoos.

Even still, some people do like to own dangerous snakes as pets.

Heck, you can even buy a viper on undergroundreptiles.com.

For those who decide to keep this reptile as a pet, one must provide the same tropical humid climate that the reptile is familiar with.

Plus, there should be no compromise on safety; a solid lid with a lock is necessary to ensure that the snake does not escape.

Just remember, this is a very dangerous animal. It’s best practice to not own one at all. And if you do, be sure to keep it in a separate building other than your main dwelling.

People who have children should not have this snake for a pet.

The snake plays a vital role in the ecosystem by controlling the number of rodents and limiting the spread of disease.

Humans do not usually come into contact with the reptile unless they venture into its habitat.

One reason the snake is studied is for the creation of antivenom.

The snake overall is not a threat to humans as it does not venture out of its rural habitat. In fact, humans kill the viper out of unreasonable fear.

If the snake is let alone, it will not attack humans. It prefers solitude and passivity.

In the long run, the snake helps control infestation by various mammals including rodents.

The African bush viper is not a threatened species but its numbers have declined over the past several decades.

The prime reason for the decrease in numbers includes urbanization, deforestation, and human killings.