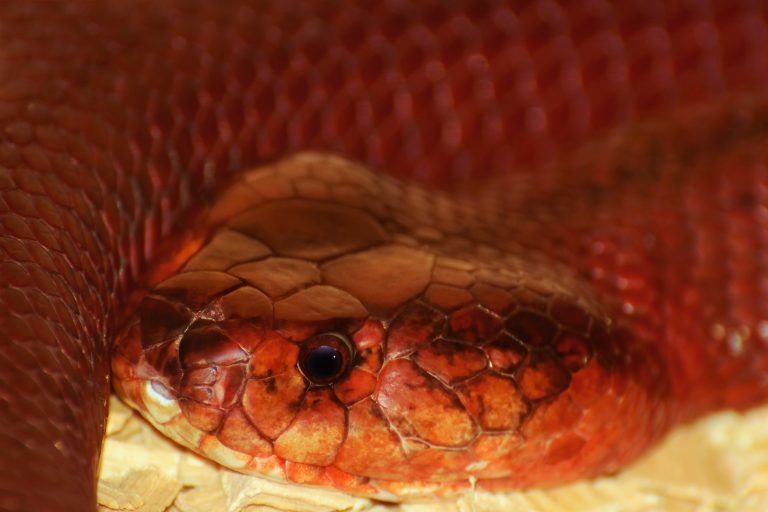 A cobra that can literally spit venom at it’s prey.

Despite it’s deadliness, reptile collectors seek this medium-sized cobra because of its exotic colors.

Where is the Red Spitting Cobra Found?

Zoos all over the world keep the cobra. This is mostly because of its fascinating colors and behavior.

I mean, who wouldn’t want to get up-close and personal with a cobra that spits blinding liquid several feet away?

The adult red spitting cobra is a nocturnal reptile. During the daytime, the snake hides in tree trunks, ravines, deep heaps of leaves, or the deep grass.

However, early in the morning, the snake basks on sandy platforms.

The cobra is an agile tree climber and hangs from the tree branches and vines.

During the night, the snake may be seen near areas of water, where other mammals also come to quench their thirst.

This species prefers the dry savanna and semi-deserted land of East Africa. The cobra is usually found near watering holes or other bodies of water.

Even though the spitting cobra has a love for trees and climbing them, it primarily lives and hunts on land.

It is one of the fastest snakes on the ground. At all times, it is highly alert and has well-developed senses that detect vibration in the ground.

The adult spitting cobra is most active at night, whereas the juveniles are more active during the day.

The snake doesn’t like the open ground and prefers to hide during the day time.

The snake has a distinct bright salmon-red color with a broad black neckband.

The band around the neck is usually black but maybe dark grey or blue in some species.

However, the color of the red spitting cobra does vary depending on which part of the African continent it is found.

For example, specimens found in northern Tanzania and southern Kenya tend to have a red-orange color with a broad black or dark blue throat band.

Spitting cobras found in the Congo and surrounding areas may be pink, yellow, grey, dark brown, or glossy black.

However, the most common color of the Red spitting cobra is reddish-brown and this may intensify with age and size.

At birth, almost all cobras will have a throat band, but with age, this band will fade or even disappear in mature adults. Some specimens from Uganda may have two or three throat bands.

The under surface in most spitting cobras is light red. Just under the mouth, the area is usually creamy white or light yellow

The canthus is obvious and the snout is round. The eyes are large with round pupils. The dorsal scales are smooth and oblique, allowing the snake to glide through the trees and grass without any friction.

When fully mature the Red Spitting cobra will grow to a length of 28-36 inches and in rare cases, some specimens can grow up to 50-60 inches long.

The lifespan of the Red Spitting cobra in captivity is nearly 20 years.

In the wild though, not all cobras reach this age; the majority die young because of predators, urbanization, exotic pet trade, and human killing them.

Besides humans, other predators of the red spitting cobra include the mongoose, larger birds, monitor lizards, other snakes, and the African badger.

How Venomous Are Red Spitting cobras?

The venom of the red spitting cobra has been extensively studied.

It is a mixture of cytotoxins and neurotoxins.

The cytotoxins damage the tissues and the neurotoxins paralyze the nerves.

The red spitting cobra will either spit the venom or inject it during a bite.

The cobra has two needle-shaped fangs in the upper jaw that connect the venomous gland.

The bite itself is only moderately painful but within a few hours, the toxins will cause serious damage to the tissues.

Most animals bitten by the cobra die within a few minutes and are then swallowed whole.

One should seek immediate medical help after a bite from the red spitting cobra. There is an antivenom available in most hospitals in Africa.

If treatment is delayed, death is not common in humans but because of tissue injury, disfigurement is common.

The snake spits its venom at the face of the intruder when it feels threatened.

If the venom gets in the eyes, it will immediately cause pain and a burning sensation. The eyes should be immediately washed under water and treatment sought.

Failure to seek treatment can lead to a permanent eye injury that can lead to scarring and blindness. Death from the venom sprayed into the eyes is very rare.

As far as being potent, the venom of the red spitting cobra is rated as 7 or 8 out of ten.

Yes, this will be a very painful experience.

While other snake venom can deliver a far more harmful blow, this venom-ejecting cobra is still not to be reckoned with.

So, how do you avoid getting bitten by a Red Spitting Cobra?

First, human interactions with the spitting cobra are fairly common in some parts of Africa.

Because of urbanization, deforestation, and loss of habitat, The spitting cobras tend to be in populated areas.

Also, There are many instances where the spitting cobra has entered a home.

Fortunately, deadly encounters with the spitting cobra are rare.

The cobra will not attack if left alone, as it is a rather timid creature. But when threatened, it will rear its head up in a hood.

Basically, if you see a cobra with it’s hood up doing a little dance, it’s time to back off.

This is especially the case with spitting cobras. When they pop upright and expand their hood, that’s a good sign that a Red Spitting Cobra is going to eject it’s venom toward you.

Also, this snake threatens by hissing loudly. If the intruder does not retreat after several warning signs, it’s likely to live up to it’s common name. (hint:spitting)

And don’t be fooled.

So, it’s best to avoid them all together.

If the venom contacts the eye it can cause immediate pain and a burning sensation.

Fortunately, just spitting the venom in the eye does not result in any deaths. But, long term damage and prolonged blurry vision can result from an untreated attack.

However, a bite from a red spitting cobra can be serious and one should seek immediate medical help.

Deaths, though are rare in humans.

One of the key features of red spitting cobras is their agility on land. They are one of the fastest land snakes on the planet.

People who come into contact with this reptile often consider it to be lethargic but in fact, it is a very alert snake that can quickly become aggressive if threatened.

The red spitting cobra avoids humans but if intimidated, it is fearless.

The majority of adults are only active at night whereas the juveniles are more active during the day.

During the day, the adult cobra will remain hidden in logs, under a pile of leaves, in a termite mound, or in an area where they have a cover.

In general, the red spitting cobra is a solitary reptile except when mating.

The red spitting cobra when hungry does exhibit cannibalistic behavior and this could be the reason why the juveniles are more active during the day whereas the adults are nocturnal.

The red spitting cobra has a versatile range of prey that includes other snakes, amphibians, lizards, rodents, birds, chickens, and other small mammals.

Like most other snakes, the red spitting cobra ambushes its prey.

The snake is patient and only strikes when a predator is within the striking distance.

One of the biggest differences between this cobra and other cobra species is the way they hunt.

Red spitting cobras will use their venom-blasting abilities to inhibit prey. While mostly used as a defense mechanism, sometimes these snakes will eject venom toward unknowing prey to blind and confuse them

Once debilitated by venom, the deadly cobras will strike and inject the prey with venom from it’s fangs.

Death is immediate and the toxins quickly destroy the tissues making it easier for the snake to swallow the creature whole.

It is oviparous meaning that after mating the female will lay anywhere from 5-20 eggs.

Mating usually takes place once a year, usually at the end of the dry season. The eggs will mature in 45-70 days.

The newborns usually measure 4-6 inches in length but are fully equipped to kill.

Unfortunately, other predators kill a large number of young newborns.

Nope. Really bad idea to keep one of these as a pet snake.

Keeping the cobra as a pet is rate because it is venomous and unpredictability.

However, zoos and private wildlife facilities are sometimes known to keep this species due to it’s exotic nature.

Like many other venomous snakes, the red spitting cobra plays a vital role in the ecosystem by controlling the number of rodents and limiting the spread of disease.

Because of loss of habitat, human encounters with this particular snake are increasingly common, but thankfully bites and deaths are rare.

The reptile is heavily trafficked because of its exotic colors and extraction of its venom- to make antiserum.

The reptile is not on the endangered list but by all accounts, its numbers have declined over the past few decades.

It is rare to see the reptile today because of loss of habitat, urbanization, deforestation, and human killings.

Each year, this cobra is losing more of its habitat to humans. The is a great concern that if preservation efforts are not undertaken, we may be the last generation to see these majestic reptiles.