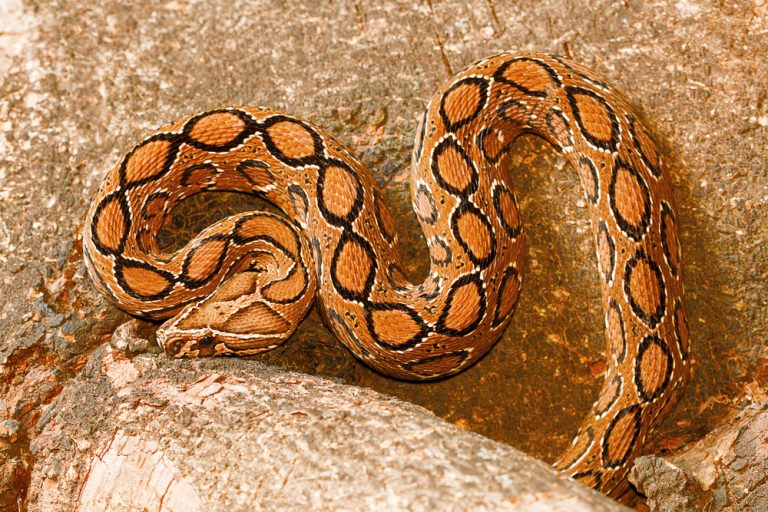 The Russell’s viper (Daboia Russelii) is a venomous snake in the Viper family. It is chiefly found on the Indian Subcontinent, parts of Asia and the Far East.

This snake is thought to be the most dangerous snakes in the world. In fact, the Russell’s Viper is known to cause around 80% of the snake bites reported in Burma.

In India, Russell’s viper goes by many monikers including the lurker, Chandra Boda, Lindu, and Ghonas.

The species is named after the Scottish herpetologist, Patrick Russel who was among the first to discover and study many of the reptiles in India.

Not only is Russell’s viper one of the biggest snakes in India, it is also responsible for causing the majority of snakebites resulting in death.

With India’s huge population, the snake has lost its habitat and consequently, interaction with humans is very common. Unlike other vipers, Russell’s viper is an extremely aggressive snake.

Russell’s viper is located throughout most of Asia.

It can be found in countries such as India, Bangladesh, Pakistan, Sri Lanka, Myanmar, Nepal, Thailand, Tibet, Cambodia, Laos, Vietnam, Indonesia, and Taiwan.

These vipers are also found on many of the Indonesian islands.

However, Russell’s viper is most abundant in India, especially the west coast and southern parts of the country.

Typically, a Russell’s viper is found in fields and low lands. Sometimes, in the early morning, it may be seen basking on a tree.

They are known to climb sometimes.

The snake is often seen in farmlands and agricultural areas, and tend to stay away from heavily urbanized areas.

This is mostly because more rodents and wildlife are found around farmlands. Just because the snake stays away from cities doesn’t mean it’s shy.

Russell’s Viper will not hesitate to approach a human, and they are best to be avoided all together.

While The Russell’s viper does not have any specific habitat, it does have some preferences as mentioned above.

Urbanization has resulted in the loss of many of its habitat in rural areas.

Plus, the snake does not like densely forested areas. In fact, it prefers open grassy and bushy areas.

It is most common around agricultural land where there are plenty of rodents and birds.

In the Far East and India, the snake is common around the rice farms, lowlands, and plains.

When it is not basking, it hides under rocks, cracks in the soil, or under leaf piles.

Because of the loss of the viper’s habitat, it is now increasingly found in urban areas and this has resulted in more frequent interactions with humans.

This is hands down one of the most intimidating and dangerous snakes in the world.

Aside from it’s known bad attitude and aggression towards humans, this species is large.

So, How Big do Russel’s Vipers Get?

This makes it one of the largest vipers in the world, up there with the Bushmaster and the Gaboon Viper.

The size can vary depending on the origin of this snake, though.

For example, Russell’s vipers found on mainland tend to be slightly larger than those found on islands.

Looks and Other Features

As for it’s looks, the viper is well built, slender, and appears muscular.

The most distinctive feature of Russell’s viper is its head which is long, flat, and triangular; on either side of the snout are large prominent pits.

These pits are used as a vibration sensing mechanism that help the viper hunt.

The neck is short but distinct from the head. Russell’s viper has a raised blunt, well-rounded snout.

Scales cover most of the head and neck area. The scales on the dorsum are strongly keeled and feel rough to touch.

The color of Russell’s viper ranges from tan, deep yellow to brown. Most Russell’s vipers have three series of dark gray/brown spots that run the length of the body.

These spots all have an outer black ring, which is made more obvious with a tinge of yellow or white around it. The middle spots tend to fuse with age.

Juvenile Russells’ are usually brighter in color ranging from clear orange to reddish-brown.

It’s typical that juvenile’s have different colors/patterns throughout many species of snakes.

Further, The viper has similar spots on its head that have pink or brown discoloration.

A tinge of white or pink is also common around each eye.

The under-belly of this deadly snake may be yellow, white, or pink and also covered in irregular dark markings.

Terrifying fact of the day:

The Russell’s viper has one the largest, needle-like fangs of any species of venomous snake.

Their deadly fangs measure about .65 inches (around 1.5cm).

How Long Do Russell’s Vipers Live?

Like many snakes, their lifespan is quite long. A Russell’s Viper can live up to 20-25 years old.

But, due to it’s hazardous environment, this species tends to live for about 10-15 years in the wild.

How Venomous is Russell’s Viper?

Russell’s viper not only is an aggressive snake but it also produces a significant amount of venom.

Its venom has been widely studied and is very potent.

Besides acting as a neurotoxin, the venom is also cytotoxic and causes significant tissue destruction.

The venom also consists of a toxin that can destroy the red cells, hence hemorrhage is common after a bite.

As mentioned several times, this is a very, very dangerous animal.

It will bite you, and it is very mean.

When Russell’s viper bites a human, there is usually immediate pain at the site of the bite.

Warning: if you have a weak stomach, you may want to skip reading this part.

Within a few minutes, the area will swell, blisters will form and start to collect blood.

As the toxin enters the bloodstream, the individual may start to develop blood in the urine.

The face and lips may start to swell and breathing may become laborious. The heart rate and blood pressure will drop.

Within 30 minutes, the site of the bite will start to show necrosis, ulcer formation and the muscles may appear weak.

Thankfully in many hospitals on the Indian subcontinent and Asia, antivenom is available which can be life-saving.

The only way to survive a bite from a Russell’s Viper is to rush to the hospital and have it treated with anti-venom immediately.

Without treatment, death is inevitable.

Most patients require several days of admission but despite treatment, tissue disfigurement at the site of the bite is common.

The Russell’s viper is a terrestrial reptile, but occasionally will be found on trees.

When on land, it will seek shelter in old termite mounds, rock crevices, ravines, brush piles, and rodent burrows.

Because they love to eat rodents, they may also be found hidden in older homes, under floors, and in basements of the home.

This is usually a big problem due to how angry and dangerous these snakes can be.

The Russell’s viper is nocturnal, especially during the hot season.

That said, when the weather is cool, it does become more active during the day.

Surprisingly, this snake is not that agile or fast. Mostly because of its size, it tends to be sluggish and lethargic.

Don’t be fooled, though.

If threatened it can quickly become aggressive and will strike without warning.

The juvenile vipers are more irritable and easily aroused.

If the intruder threatens the snake, the snake will raise its upper part of its body off the ground, appear coiled in an S-shape and hiss loudly.

At this point, if the intruder does not back off, the snake will strike.

However, it is the presence of rodents and lizards which are the chief attraction to urban areas. Unlike other vipers, juvenile vipers do exhibit cannibalistic behavior.

Like all vipers, the Russell viper ambushes its prey.

Sometimes, it may actively seek prey by following them.

The snake releases the prey after a bite, once the venom has killed the prey it is consumed whole.

Since it has a deadly bite, the snake has no need to construct.

The snake does not have the heat-sensitive pit organs to detect prey.

However, it has an extremely well-developed vibration sense and can sense prey at a distance.

Reproduction and Mating of the Russell’s Viper.

The male may have to fight off other males to get the opportunity to mate with the female.

Russell’s viper is ovoviviparous, meaning that the eggs remain inside and mature inside her body.

The snake gives birth to live newborns after a gestation period of six months. The number of younglings may vary from 2-30; but the higher the number, the greater the mortality.

The snake gives birth to newborns during summer. Newborns are born with independent living characteristics.

At birth, the young snake is about 6-8 inches in length and will reach sexual maturity between 2-3 years.

Unfortunately, most younglings do not make it to maturity because of a lack of food and other predators.

Is Russell’s Viper a Good Pet?

The Russell’s viper is a strong, hostile, and very venomous snake.

Again, the viper is not a recommended pet. It is likely to bite, and also carries a huge volume of venom per strike.

Russell’s viper plays a vital role in the ecosystem. It is a top killer of rodents and helps control the spread of disease.

Russell’s viper is not a threatened species but its number has severely declined over the past 3 decades.

Part of the reason for the decline is because of illegal trade to pet shops, killings for its beautiful skin, and some people even consuming it for its meat.

The only reason the species has continued to thrive is that it is adapting to modern human habitats.