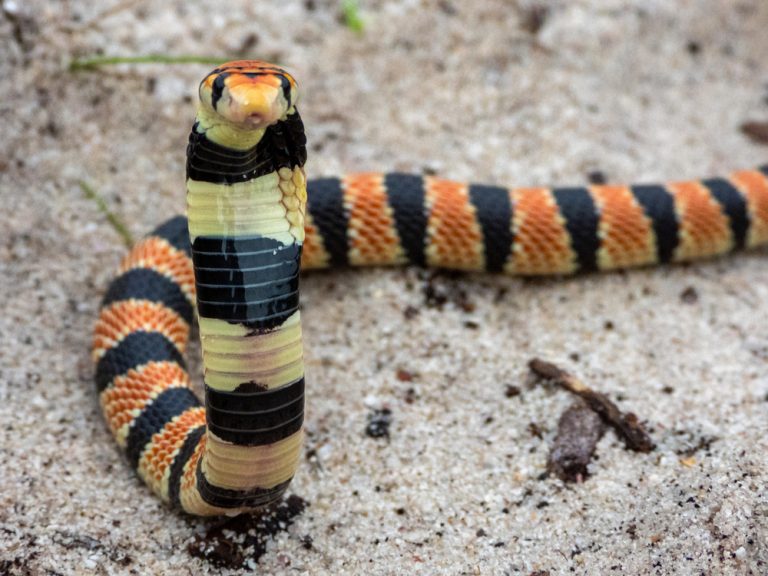 It is a relatively small venomous snake belonging to the Elapidae family and is chiefly found in Southern Africa.

The cobra is usually identified by its glossy, orange-reddish marking and circumferential black bands that extend throughout the body.

It can also be identified by the large nasal scale on the snout.

Of all species of Cobras, this is one of the more colorful looking ones. Don’t be fooled, though.

This is still a highly venomous serpent. Comparatively though, it’s a lot less dangerous than other species, though.

In this post, you’ll learn all you need to know about this coast-dwelling snake. Also, you’ll find around 10 different fascinating photos of the Cape Coral Cobra.

This small cobra prefers a habitat in tropical and subtropical regions of Africa.

Cape coral cobras can be found in Namibia, Botswana, South Africa, and Lesotho.

These snakes are almost exclusively found in the Southwest Coast of Africa. The further inland you get, the less likely you’ll spot one.

Heck, who wouldn’t want to be near the beautiful coasts of Africa? I don’t blame these snakes at all.

Lastly, there are rare reports of the cape coral cobra in southern Zimbabwe.

So, sometimes these coastal-dwelling serpents will gravitate inland.

If you want to see one of these coral cobra serpents, you will likely have to travel a long ways.

This snake does not live in many densely human populated areas.

The cape coral cobra is one of the few snakes to like a sandy desert habitat.

So to find one, one needs to go to the desert area.

It is very rare for humans to see the snake because it mostly comes out of hiding during the night. Also, not many humans like to go in very arid, desert-like conditions.

In fact, this is one of the reasons why this species rarely bites a human. We simply do not interact with these snakes as much as other, more urban-dwelling species.

South Africa has a large area of land with little or no rainfall, little vegetation, and mainly scrubs and shrubs, and this makes the perfect habitat for the cape coral cobra.

The reptile will often burrow under the sand near watering holes.

The snake has a uniform bright orange-reddish color interrupted with black bands on the dorsal surface.

Sometimes the bands maybe blue or even dark brown.

The size and shape of these black bands do vary.

The number of black rings varies from 24-48,depending on the length of the snake.

Like other cobras, the cape coral cobra also has a narrow hood just below the head.

The body of the snake is relatively thin and muscular.

It has an enlarged rostral scale, which is the scale located at the front of the snout above the mouth opening on the snake.

The head of the snake is very small in comparison to the rest of the body.

However, what differentiates it is its bright colors that range from yellow, red to orange. The colors resemble the pattern seen on some corn snakes.

Scales cover most of the body and are quite smooth, allowing the snake to burrow into the ground.

In the wild, the snake’s lifespan is not well documented. The Cape Coral Cobra will likely live to an age of about 10-15 years old.

If kept in captivity, it can likely live for longer.

The Cape coral cobra is a relatively small snake.

The rare snake will occasionally grow longer, and even then, it’s still a tiny little serpent. As is with most other species, females tend to be a few inches longer than the males.

How Venomous Are Cape Coral Cobras?

The venom of the cape coral cobra has not been well studied.

However, some experts suggest that it has a similar toxicity as other cobras.

The Cape Coral Cobra is so small, and because of that, it has much less venom compared to larger snakes.

Even though the volume of venom produced by the snake is small, it is still fairly potent.

But, most of the time, it’s not potent enough to kill someone. That said, if you get bitten by one of these suckers, it’s going to be a bad time.

As it would with just about any venomous repitle.

The venom appears to be primarily acting as a neurotoxin that causes muscle weakness, respiratory failure, and eventually death.

Most small mammals die from the bite, but the same does not apply to humans.

The snake has bitten humans but overall, fatalities are not common. However, if bitten by the snake, it is important to seek immediate medical attention.

Most people recover with supportive care but those who are very ill may require antivenom.

The key reason why not many human bites occur is that this species resides in arid areas where humans usually do not venture.

The snake is a solitary reptile only coming together during the mating season.

The cape coral cobra, like most other snakes, is active at night.

During the day it prefers to hide in small tunnels, ravines, burrows under the sand, and rocks.

It spends most of the daylight hours hidden underground and only emerges at night to hunt for food. The cobra basks in the sun during morning hours.

The cape coral cobra is terrestrial, but will sometimes be found climbing a small tree.

The reptile is also known to venture outside its hiding place when it is cold, whereas most other snakes prefer to go out when it is warm.

The cape coral cobra is a small snake but it is very easily upset. It can rapidly turn aggressive.

When threatened it will coil its upper body, stand up, hiss, and repeatedly strike. The small cobra-like hood is obvious.

The cape coral cobra hunts at night and because of its poor vision; it chiefly relies on smell and other senses to hunt prey.

Because it is hard to ambush prey in desert areas, the snake will actively hunt for prey. It has a varied diet but prefers lizards.

Other animals that it eats include rodents, skinks, small snakes, and birds. It also tends to hunt mammals that are sleeping.

When prey is within the target, the cape coral cobra will coil its upper body, spring forward, bite the prey and inject the venom.

This all takes only a matter of seconds. Most prey become paralyzed within seconds and die fast. The snake will then devour the prey whole.

The cape coral cobra breeds around the ages of 2-3 years. Usually, mating takes place during the cooler months of the year. This is about the only time the snake becomes social, otherwise, it remains a loner.

The female is oviparous (lays eggs). Extensive details about the reproduction cycle of the cape coral cobra in the wild are a mystery.

More information on the snake’s reproduction has been collected while captivity, and it is one of the easiest snakes to breed.

The snake breeds once a year usually in early winter. At this time, the female is also more aggressively searching for food to ensure a satisfactory pregnancy.

The snake lays eggs sometime in early spring, and after two months, the eggs will hatch. In most cases, the female will lay between 6-10 eggs.

The newborns will vary in length from 6-8 inches and will have all the physical features necessary for independent survival.

The cape coral cobra female does not make a good parent and unfortunately many of the younglings do not make it to maturity because of predation.

Because this cobra usually has several exotic colors, it is popular among exotic pet entusiasts.

That said, this is not a great pet snake for the every day snake owner.

The snake unpredictable, and it gets angry very easily. The younger ones tend to be more aggressive than older snakes.

So short answer: no, this cobra, nor any cobra, make a good pet. There are plenty of other great options out there we’d recommend.

The conservation status of the cape coral cobra is not known.

Even though the snake is not listed as endangered, its numbers have seriously declined over the years.

Some reasons for the decline are increased traffic and loss of habitat due to the construction of roads, human killings, and other wild animals.

The snake is also heavily trafficked in the pet trade. This is because the cobra is one of the most attractive snakes in Africa.